Do Cell Phones and Tablets Affect Communication and Concentration in Hospitals and Doctors' Offices?

“A resident observing the surgery takes a call on his cell phone. The scrub nurse flips through images of wedding dresses on her smartphone. The operating surgeon’s assistant steps in to ask a question about another patient. The anesthesiologist taps his foot in time to the beat of the music in his earbud. It’s just another day in the OR (operating room).” (From a doctors’ discussion on how distractions in the operating room threaten patient safety, article appearing in the journal of the American Academy of Orthopaedic Surgeons.)

A commentary by Peter J. Papadakos, MD, anesthesiologist and director of critical care at the University of Rochester Medical Center in upstate New York, first published in Anesthesiology News, focused on his concerns that the non-medical use of wireless devices, such as smartphones and tablet computers, would be distracting. He also related his anecdotal experience of seeing OR staff surfing the Internet during a surgery. The New York Times later picked up and expanded upon this issue.

Hospitals and doctors’ offices, hoping to curb medical error, have invested heavily to put computers, smartphones and other devices into the hands of medical staff for instant access to patient data, drug information... , however the wealth of data on the screen — the “iPatient” — sometimes gets all the attention.

“You walk around the hospital, and what you see is not funny,” said Dr. Peter J. Papadakos, who added that he had seen nurses, doctors and other staff members glued to their phones, computers and iPads.   “You justify carrying devices around the hospital to do medical records,” he said. “But you can surf the Internet or do Facebook, and sometimes, for whatever reason, Facebook is more tempting... 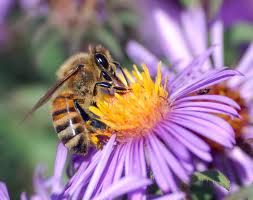 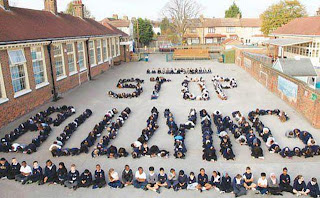 A nationwide “Stop Cyber-Mobbing” campaign will be conducted  in all Swiss schools via billboards, television adverts, a Facebook page and information sessions. The next school campaign should be one on the health risks of cell phones and precautionary measures to take when using them. More Swiss probably remain ignorant of cell phone dangers for children than of cyber-bullying (half the population does not know what cyber-bullying is ).

Cyber-bullying pulled out of the shadows
swissinfo.ch and agencies, 22 October 2012

The [Swiss] youth organisation Pro Juventute has found that that one in five teens has been bullied online and most don’t know where to turn to for help. Bullying-related calls to its hotline have also jumped, prompting a national awareness campaign.

Pro Juventute’s emergency “147” telephone hotline, designed to serve young people in need, has reported a significant increase in calls from troubled teens who have become the targets of name-calling, teasing and verbal abuse via the internet.

Cyber-bullying is particularly threatening to teens because it continues away from school, is not monitored by adults and can often be conducted anonymously. 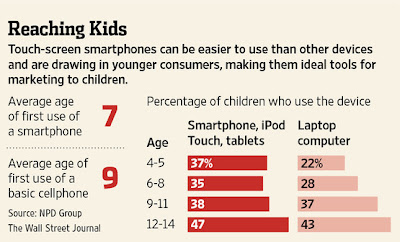 Mobile apps are a new, popular and unregulated way to market candy and soft drinks to children. U.S. food companies are reaching children by embedding their products in simple and enticing games for touch-screen phones and tablets. A recent survey by research firm NPD Group found that 37% of 4- and 5-year-old Americans were using such mobile devices. Jennifer Harris, who directs research of marketing practices at the Yale Rudd Center for Food Policy and Obesity, says "If children have their phone with them, they can be playing these games that are basically advertisements in school and basically 24/7."

One of the first food-branded mobile games sprang out of a 2009 brainstorming session at a small design firm in Shaker Heights, Ohio. Teresa Kiplinger, a partner at the firm, impulsively licked her iPhone. The screen responded. Within weeks, Ms. Kiplinger and her partner had a pitch for a longtime client, Dum Dum Pops maker Spangler Candy Co. of Bryan, Ohio. The app, "Dum Dums Lick-A-Pop," would let players ingest a virtual Dum Dum lollipop by licking their smartphone before a clock ran out. Spangler signed off, but Apple rejected the app, saying licking could damage the devices. Developers replaced licking with a vertical finger swipe and the result was "Dum Dums Flick-A-Pop."

(My thanks to Public Citizen for the recent articles posted here.  Consumer advocate, Ralph Nader has written, "Getting Steamed to Overcome Corporatism" which points the way to many such excellent consumer and activist sites.)

Public health researchers at the University of Sydney found 107 applications on iPhones and Androids with pro-smoking messages, including 36 so-called smoking simulators. Many of the applications may be downloaded for free and target children. At least 6 million users downloaded the 10 Android simulators by February 2012.  At the same time, the University of Geneva has developed a smartphone application (“Stop-tabac”) to help persons stop smoking.

You can do just about anything with your phone these days. Take an electrocardiogram. Confess your sins. Even smoke a cigarette

Yup, you read that correctly. Android and Apple offer apps that let you light and smoke a virtual cigarette. You simply blow into the microphone, or onto the screen, and an image of a cigarette glows red and "burns."

Some apps time how long it takes to puff the whole fag, while others have a virtual ashtray that pops up messages like, "Would be even better with a beer in your hand!"

"There is and will always be a use for technology in our lives, period. At the same time, I think we are learning more and more and more that you have to be careful...you have to use it safely," the former President of Microsoft Canada Frank Clegg says.   Cellphone manufacturers BlackBerry and Apple both feature fine print warnings in user manuals that advise users to keep all devices at least 15 mm away from the body during use. But Clegg says the Canadian Government should put obvious warning labels on wireless devices because most people don't read the fine print.  Clegg has established an organization (http://www.c4st.org/)  which provides consumer safety tips and scientific information about technology including cell towers, cellular phones and wireless Internet.

OTTAWA — The former president of Microsoft Canada says the federal government has a duty to inform Canadians about safety concerns related to wireless technology.

"We have a responsibility as adults, as parents, as legislators to inform people so they can make intelligent decisions," Frank Clegg said in an interview with QMI Agency.