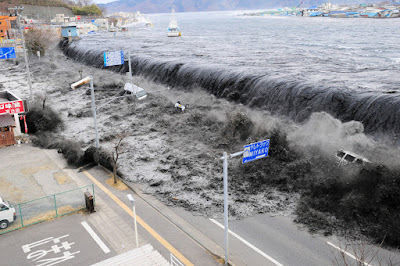 On 14 March 2011, Switzerland declared a moratorium on the reconstruction of three of its five nuclear installations. These installations were built to resist an earthquake of the magnitude of 7.0 on the Richter scale. The last earthquake of this magnitude occurred in Basle in 1356. The Swiss were to vote on this issue in 2013 and in fact, the canton of Berne had voted only last month by a majority of 51% to 49% to go forward with replacing the reactor which is 40 years old and similar to that of Fukushima. Angela Merkel has announced the immediate shutdown of seven of Germany’s oldest nuclear installations for the next three months.

Not only is there the issue of the risk of accident which has the potential to affect very large populations over a vast area but also the ones of uranium mining which contaminates the environment and toxic nuclear waste. We must act now to pressure our governments into considering the phasing out of nuclear energy.

Are there more devastating natural disasters occurring closer together or is it the omnipresence of the media, the earth’s huge population, disasters happening in densely populated areas which makes the recent Japanese earthquake – and any disaster of this magnitude - so frightening?

While the main focus of this blog is the impact of the environment on health, we cannot neglect reflecting on recent events: the upheaval in North Africa and parts of the Middle East where people are sacrificing their lives to win freedom from their oppressors and the earthquake and tsunami in Japan. 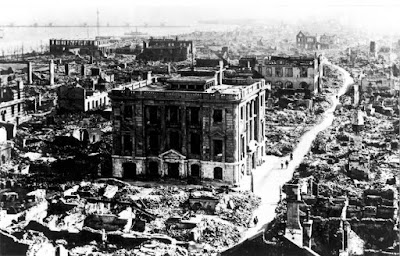 For our family personally, the recent massive disaster in Japan has rekindled memories of the Great Kanto earthquake which occurred in Tokyo and Yokohama in 1923, Japan’s last great earthquake (8.3). My mother, who is 96 years old, is a survivor of that disaster which killed over 140,000 persons and destroyed some 600,000 buildings. She and her brother were saved by their servant. When the tremors began, she shouted to the children that "this is a big one" and to come down from upstairs where they were playing. They ran out of the house just in time before the tiled roof collapsed. Their father was working in the city at the time. It took him 3 days to find his way home. Along the way, he helped to pull people from the rubble. Most of the casualties were victims of the fires which were set off by overturned hibachis (the quake occurred at noon when persons were cooking lunch). People had to move inland to escape the tsunami which followed. My mother's family lost all their possessions in the quake and had to be evacuated back to the United States by the Red Cross. (As a side note, the father of Andy Rooney – of “60 Minutes” – was in Tokyo at the time of the earthquake, staying at the Imperial Hotel, which resisted the quake. The hotel had been constructed by the American architect, Frank Lloyd Wright, who built it to resist earthquake.)

The 11 March earthquake occurred in Sendai, an agricultural and fishing community of about one million persons. The impact of this disaster on the lives and environment of this population, comprising many older persons, will be devastating. It reminds us of our fragility in the face of the terrifyingly powerful forces of nature. It also reminds us that our society is set up in such a way that it could magnify the devastation of such disasters. There are several nuclear reactors in the affected area which have had to be shut down. The potential for a further disaster exists. If the reactors cannot be cooled, the core will be exposed, temperatures will rise to as high as 5,000 degrees F. The reactors could experience a meltdown. Unlike Chernobyl, Japan and the United States have safety systems which make it difficult for radioactivity to escape (information source: CNN International).

This invites reflection on the potential dangers of nuclear power and its impact on the environment and health: radioactive leaks, nuclear waste, uranium mines. Twenty per cent of the world's 432 nuclear reactors have been constructed in zones of seismic activity. We must continue to advocate for the phasing out of nuclear power as a source of energy.

(Refer to the advocacy organization “Nuclear Information and Resource Service” www.nirs.org for updates on the situation of the Japanese reactors and information on what one can do to halt the construction of reactors and other nuclear issues concerning the United States.)