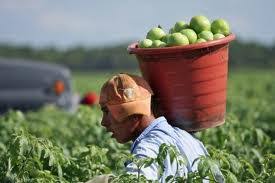 Migrants working in the tomato fields of Ag-mart in Immokalee, Florida, are exposed to very toxic pesticides.  Ag-mart is a tomato harvesting company that grows tomatoes in three states.  It employs about 500 migrant workers to stake, plant and pick tomatoes.  Most of the workers are from Mexico and Guatemala and are employed under deplorable conditions (see my article, "Cultivation of Tomatoes").

Among the workers were three women who gave birth in 2004 to babies with very serious birth defects. The first baby, Carlitos, was born with spinal and lung deformities and without arms and legs. Jesus was born six weeks later with a deformation of the jaw which placed him at risk of being unable to breathe. The third baby, Violeta, survived only 3 days. She was born with only one ear and one kidney, without a nose and anus, and with a cleft palate.

All three mothers had been exposed to pesticides while working in the tomato fields during days 14 to 59 of their pregnancies, the period when birth defects are most likely to occur. The tomato fields were treated with 31 chemical substances during the growing season. At least three of these pesticides, mancozeb, metribuzin, and avermectin were known as toxins which could cause birth defects according to the Pesticide Action Network. Ag-mart did not adequately train its workers in the use of toxic pesticides. The women were not provided with protective gear except for scarves to cover their mouths. Exposure of these women so soon after spraying the fields was in fact a violation of the regulations of the Environmental Protection Agency.

One of the women described her suffering during working in the fields:  dizziness, nausea, vomiting, burning of the eyes and nose, skin rashes and open sores.  She worked in the fields from preconception through the seventh month of pregnancy.  She would have lost the housing provided by her employer had she ceased working.

The jaw malformation of Jesus was not as serious as feared.  Carlitos developed respiratory problems and had to be transported by plane to a hospital in Miami.  Unable to afford medical costs, at the suggestion of social workers, his parents sought legal aid.  Andrew Yaffa accepted to defend them without charge.  He would receive a percentage of the sum granted if he won the case.  A partner in the law firm, Grossman Roth, he had a reputation in Florida of winning legal settlements granting millions of dollars to victims. 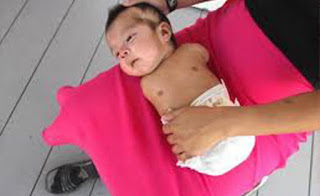 Legal cases implicating the agricultural industry are very difficult to win.  Proving a link between exposure to pesticides and birth defects is nearly impossible due to factors such as heredity, exposure at other workplaces, smoking, and drug abuse.  Instead of trying to determine which chemical substance caused the birth defects and thus bring suit against its manufacturer, Yaffa decided to build a case against the agricultural company, Ag-mart, where the mother of Carlitos worked.  In fact, the entire modern agricultural industry and its use of pesticides were put on trial.

In 2008, Ag-mart accepted to compensate the parents of Carlitos, by covering the child’s medical expenses for the rest of his life. Ag-mart had to pay millions of dollars in fines for violation of regulations including inadequate training of their employees on pesticide use and causing Carlitos’ birth defects.  There are now more on-site inspections of the use of pesticides and exposure.  Education of workers regarding spraying and working around pesticides is now mandatory, and they must be supplied with protective gear.  Above all, Ag-mart has stopped using five of the six pesticides known to cause birth defects.