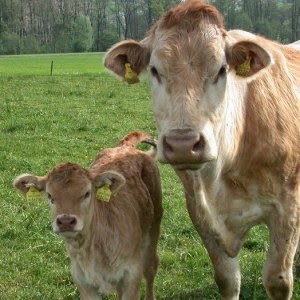 With so many farmers having damaged animals, the Swiss Farmers’ Union (Schweizer Bauernverband) turned to the association Gigaherz for information on non-ionizing radiation. The Union is very well represented in the Federal Council in Bern. The pressure of Union members complaining about harm to animals and people became so great that the association was forced to act.

Both fact sheets begin with the same text:
Again and again farmers log on to the SBV (Farmers’ Union) and complain about health problems in their herds, which they attribute to different external influences, summarized as "electrosmog" : mobile phone antennas, radio antennas, railway lines, power lines, electric and magnetic fields, and other technical equipment...

The first fact sheet provides information to farmers on how to proceed with objections to planned installations in their neighborhood. Somewhat more detailed information on objections and appeals is available on the website of Gigaherz. See http://www.gigaherz.ch/beratung/einsprachen/

The second fact sheet is meant to help farmers when the following animal health problems occur:

Highlighted here is the fact that similar symptoms may be felt by the people on these farms and that the purpose of the leaflet is not limited only to the situation of farm animals.

Among the 8 suggestions for action, one points out the corruption that Switzerland is experiencing in terms of EMF : Experience to date shows that the operators are reluctant to take responsibility. Counter-opinions and other actions avert responsibility and gain time, in the hope that the farmer gives up or the dispute costs him too much.

The new activities of the Swiss Farmers' Union have triggered great nervousness among the mobile operators. This is because there are plans to set up thousands of new cell towers. mainly in the agricultural zone, along railway lines to provide rail passengers with seamless reception on their iPhones and tablets.