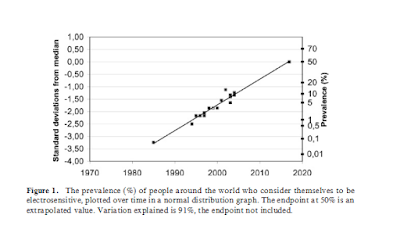 Those with EHS are finding that our increasingly electrified environment is becoming unbearable. They are being forced out of society as accessibility to public places becomes severely restricted because of health issues resulting from exposure to unwanted and non-consensual RF exposure, particularly to digital wireless transmitters (WiFi, Smart Meters, Smart Phones, Mobile Phone Towers etc.) Affected people are left with no choice but to abandon their homes and seek refuge in safe EMR free zones all around the world known as “white zones”. We even have people in Australia actively seeking to establish white zones as indicated in this linked story. http://electroplague.com/2014/09/21/ehs-refuge-in-australia-people-needed/

Recognition of the dangers of EMR as well as EHS by other countries around the world:

- Sweden – EHS is a functional impairment thus sufferers are entitled to a disability pension. http://www.es-uk.info/info/sweden.html
- Germany – makes shielding materials tax deductible http://www.electrosmog-free-living.com/index_e.htm
- France – finalizing legislation to reduce radiofrequency levels and requiring WIFi in primary schools to be switched off when not in use. The French Government will also be required to submit a report regarding electrohypersensitivity .http://www.naturalnews.com/043695_electrosensitivity_wifi_french_government.html
- Israel – The supreme court issued a court order to the government to check how many children are already sick with EHS, thereby accepting the existence of EHS and its relation to radiation, but it also demanded that the government specify in its statement the exact measures it took in order to conduct the inquiry. http://www.emfields-solutions.com/news/2014-04-28-israeli-injunction.asp
- Italy – local government in the region of Basilicata pays co-payments for all medical expenses incurred by people diagnosed with EHS.

Australians with EHS have no such recognition and support. They are often condemned to suffer alone as relationships breakdown with the impacted individual(s) having no choice but to move from their family homes. If they go public with their condition, they are likely to be ridiculed or disbelieved. In some cases they may be bullied by the medical community into accepting medication, a psychiatric assessment and/or confinement. Many studies have been performed over the last 70+ years in relation to the effects of EMR and yet only environmentally trained doctors appear to be aware of EHS.

Accessibility, a key issue highlighted in the rights of the disabled states that everyone is entitled to have accessibility to their world and to earn a living without obstruction to the normal supports and public services that the community can access. Unfortunately for EHS suffers, accessibility to the following places is seriously compromised:

- Shopping centres with mobile phone towers installed on the roof, free WiFi installed and emitting throughout the complex and smartphones everywhere operating WiFi, Bluetooth and 4G signals.
- Hospitals, which should be providing an optimum environment for healing and recovery have a multitude of wireless devices
- Doctor and Dentist surgeries that have WiFi, Bluetooth headsets etc.
- Hairdressers, sporting facilities, beaches, public parks that have mobile phone towers situated nearby or offer public WiFi access
- Schools with industrial strength WiFi which is often tightly integrated into the core network and so cannot be switched off
- Neighbourhoods – cordless phones , WiFi, smart meters, mobile phone towers etc.
- Cities – City-wide WiFi, mobile phone towers, non-stop emissions with no escape
- Work places

For those who are unfortunate enough to be EHS, Australia is not the “lucky country”. Most of the time, they are denied access to adequate and dignified medical care. Many doctors are unaware of the condition as formal training does not cover this area of human health. This lack of awareness can lead to a high chance of misdiagnosis and the prescription of inappropriate medication. Moreover, access to all types of medical treatment is often thwarted due to the high levels of man made radio frequencies present in these environments that are supposedly dedicated to healing. Many hospitals now have masts on top of them which seems to be an outrageous contradiction.

Australian children who are electrosensitive lose their right to be educated in a safe and healthy environment. Virtually ALL Australian primary and secondary schools now have Wi-Fi installed without any due consideration to those parents who don’t want their children irradiated.

The message from industry, government and governmental agencies is clear:

Electrosensitve Australians do not appear to have the same worth as human beings as other Australians. They are acceptable collateral damage in order to support technical innovation and increased profits.

Can we as a society accept the marginalization of 3-5% (and growing) of our population, simply on the basis of a medical impairment? Is this consistent with the values we want to uphold as a community, let alone with our human rights?

SSMA is committed to sending a strong message to people with EHS:

YOU DESERVE A BETTER DESTINY

SSMA will be looking to effect change by improving public awareness and raising this issue directly with the authorities who are empowered to address this serious issue.