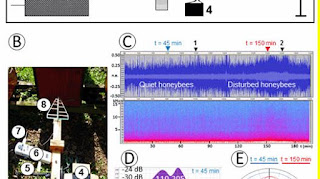 ABSTRACT
Mobile phone companies and policy makers point to studies with contradictory results and usually claim that there is a lack of scientific proof of adverse effects of electromagnetic fields on animals. The present perspective article describes an experiment on bees, which clearly shows the adverse effects of electromagnetic fields on these insects’ behavior. The experiment should be reproduced by other researchers so that the danger of manmade electromagnetism (for bees, nature and thus humans) ultimately appears evident to anyone.

INTRODUCTION
A pollinator crisis, especially concerning the honeybees, has been occurring during these last two to three decades [1]. Several causes have been proposed to explain the worldwide disappearance of the honeybees: the varroa mite, viral and bacterial infections, single-crop farming, pesticides, mobile apiaries, too severe winters, or genetically modified plants. There is no doubt that all these factors are harmful for the bees.

On the other hand, several reviews deal with the ecological effects of radiofrequency electromagnetic fields (RF-EMF), e.g. [2]. There are reasonable grounds for admiting that RF-EMF severely impacts the nature, the health of all living organisms (plants, insects, birds, mammals, …) [3], honeybees included [4]. The latter hymenoptera fly often far from their hive, and rather high. Doing so, they approach RF-EMF of high intensities (due to the presence of masts), are impacted by the electromagnetism, and can no longer find their way. Indeed, it is known that honeybees possess magnetite crystals in their fat body cells and that they present magnetic remanence; these magnetite structures are active parts of the magnetoreception system in honeybees. Indeed, the presence of a mobile phone handsets in a hive has a dramatic impact on the bees‘ behavior: it induces the worker piping signal (a sound produced by the wings of the honeybees). Worker piping either announces the swarming process of the bee colony or signifies that the colony is perturbed [5]; this signal in a bee colony is not frequent, and when it occurs in a colony that is not in a swarming process, no more than two bees are simultaneously active.

Little attention, if any, has been given to the potential harmful effects of electromagnetic waves on nature in general and above all on honeybees. Therefore, a simple and affordable method for studying in more details the effects of RF-EMF on honeybees in the apiary was set up. It consisted in locally collecting and amplifying the ambient RF-EMF and in focusing this amplified signal on individual hives, with well established, commercially available techniques (Figure 1a & 1b) and using intensities approved by international regulations [6]. The bees’ behavior then observed was the sound the workers emitted under radiation. The technique being clearly detailed in the present perspective paper, other researchers are invited to reproduce the experiment for confirming (or infirming) the effects of EMF on bees’ behavior. Note that bees (as well as birds) fly and are thus susceptible to be exposed to EMF of rather high intensities.