Switzerland: 5G: "We're Being Lied to about the Consequences."

5G: "We're being lied to about the consequences."
by Christian Rappaz, illustre.ch, 6 February 2020 - translation

An EPFL electrical engineer and specialist in electrosmog, Olivier Bodenmann, is one of the initiators of the Stop 5G movement. He explains why the resistance to the fifth generation of mobile phone standards continues unabated. 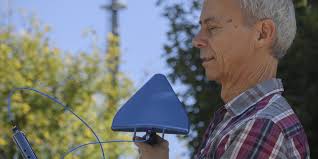 - Operators, the economy and part of the political world present 5G as a major step forward for Switzerland. Aren't you putting the brakes on this development?

- Olivier Bodenmann: People are rushing into 5G without thinking about the consequences. Worse still, we thought about it and decided to go ahead anyway, without regard for people or the environment. On the one hand, we are making efforts to reduce our carbon footprint; we are even counting on 5G for that. On the other hand, we are going to induce a frightening pollution with a hundred billion objects connected to build and then recycle, we don't know how yet. Not to mention countless data centers that are ultra energy intensive. It's a totally schizophrenic approach.

- The operators accuse you of impeding progress...

- It is not a question of going against the tide but of being realistic, of going in the direction of respect for human beings and the planet. We want to impose a new technology without taking into account the precautionary principle. In my opinion, this is pure recklessness and is a flagrant violation of international law. It is human experimentation on non-consenting human beings. Furthermore, it is claimed that 5G is indispensable for digitization, but this is not true. The argument that we must anticipate the saturation of the mobile network due to the continuous increase in data consumption does not hold either. The number of smartphones has stopped growing and they are already being used almost to their fullest. There are solutions for deploying such technology in a respectful manner, less invasive, but we prefer to ignore them for financial and planning reasons.

- Still, there are some interesting prospects, especially from a medical and economic point of view...

- Indeed, we hear that 5G is crucial for many applications. Teleworking, telemedicine, machine-to-machine communication, energy management... But these are fixed, not mobile applications. They are very powerful without 5G, with fiber optics. Swisscom's deployment of the latter covers 90% of our territory.

- Your words are very strong...

- They are in tune with the seriousness of what is happening. 5G means building ten-lane highways and making local residents believe that they will cause no more inconvenience than a cantonal road. It is necessary to put safeguards in place because the negative effects outweigh the benefits so much touted by the telecoms industry. It's time to stop this irrational madness of "always more"!

- However, at the recent Consumer Electronics Show in Las Vegas, it was said that 5G equipment will consume 10% of the energy of their 4G equivalents...

- According to the IEEE (Institute of Electrical and Electronics Engineers), and I quote: "A 5G base station should generally consume about three times as much power as a 4G base station". And it takes more 5G base stations to cover the same area." As for the cloud, it's already the fifth largest energy guzzler on the planet.

- You make it sound surprising that Greta Thunberg and the pro-climate activists never mention 5G...

- I'm surprised too. In Lausanne, we were just a few meters from Greta with a big banner saying "Stop 5G". But an appointment was made with local activists to talk about it.

- The Federal Office for the Environment issued its findings on 5G at the end of November. What do you think about it?

- They do not contain any statements on how 5G can be deployed safely. Five options have been listed, ranging from the status quo to the option put forward by ComCom or the operators, which requires an increase in antenna power of up to a factor of 16. If chosen, the latter option would allow emissions of up to 20 volts per meter instead of the current 6 volts per meter. But whichever option is chosen, the problem is totally distorted.

- What do you mean by that?

- It all depends on how the emissions are calculated. Instead of taking into account the maximum values, a 24-hour average will be used, reduced by a factor of 2.5 to account for the fact that the antenna is not always transmitting at full power. This will make it possible to claim that the limit values are being complied with, even though they will at times be exceeded by a very large margin, as shown in our diagram. This is like limiting the average speed on a motorway but not the maximum speed. You could drive at 300 km/h as long as you don't exceed the 120 km/h average speed.

- Despite a moratorium in several cantons, operators are announcing a 90% coverage of the territory. How is this possible?

- In the cantons under moratorium, operators can no longer build new masts, but they can benefit from the building permits already allocated. They can also modify existing antennas, including adding 5G antennas, and carry out remote software updates that allow a 3G antenna to be converted into a 5G antenna, known as a basic antenna, in the blink of an eye. Despite this, the so-called coverage over 90% of the territory is not real 5G at the moment.

- Does policy really have a hold on such a global issue that seems so lucrative for the economy? And all the more so since the licences have already been allocated?

- Indeed, the cart before the horse by selling the licences before worrying about the problems. Nevertheless, policy measures may be appropriate to avoid a possible health catastrophe. For example, by imposing lower limit values, as called for in Council of Europe Resolution 1815: 0.2 volts per meter. By forcing the separation of indoor and outdoor networks, which would greatly reduce the radiation of mobile devices indoors. The current situation is absurd. By connecting to powerful outdoor antennas, it is as if you wanted to light your apartment with the light from street lamps.