The Lies Must Stop - Disband ICNIRP

The Lies Must Stop
Disband ICNIRP

Facts Matter, Now More Than Ever 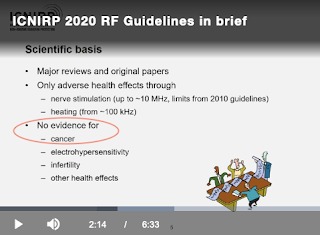 We’re all frazzled and anxious. The world has changed, seemingly overnight, and we don’t know when and how we will ever go back to normal —whatever that means. One thing we don’t have to worry about is whether 5G radiation is responsible for COVID-19. It’s not. There’s no credible evidence to suggest otherwise.

Lots of data show that various types of RF radiation can affect our immune systems.* But, like everything else about electromagnetic radiation, the necessary follow-up research was never done and no one knows for sure if electronic smog makes us more vulnerable to disease. I’ll leave that conversation for another time.

Yet, there is at least one parallel between how we’ve been struggling with COVID-19 over the last few months and how we have been dealing with electromagnetic radiation for the last few decades. In each case, science has taken a back seat to politics. The failure to separate fact from fiction has made the battle against the coronavirus far worse, especially in the U.S. Much the same can be said of how governments and scientific committees have addressed electromagnetic health risks.

The public has been fed lies and half-truths about the health effects of RF/microwave radiation for as long as I have been involved, since the 1970s. The campaign has created a culture of confusion, especially with respect to cell phones and cancer. In this environment, why would anyone be surprised that sensational conspiracy theories about 5G have found a footing?

The Microwave News website is chock-full of articles describing how the public has been misled time and time again. Here are two current examples from those who are supposed to serve as the world’s experts and to protect us from EMF/RF hazards: the members of the International Commission of Non-Ionizing Radiation Protection, ICNIRP for short.


“No Evidence for Cancer”

The first is from Eric van Rongen of The Netherlands, the current chairman of ICNIRP. Van Rongen has posted a six-minute overview of the Commission’s updated RF exposure standards, issued about a month ago. Two minutes into his PowerPoint narration you can hear him say, “There is no evidence from all [this] scientific information for the induction of cancer by radiofrequency fields” (see slide below).

Anyone who has been paying any attention at all knows that this is —let’s not mince words— a lie. Van Rongen and the other members of ICNIRP should go to the nearest blackboard and write 100 times: The U.S. National Toxicology Program has found “clear evidence” that exposure to RF radiation can lead to cancer.

I hasten to add that the NTP study is only one of many that show an RF–cancer link. It’s the most important and the most persuasive, but hardly the only one.

ICNIRP may not agree with the NTP finding, but that is what the $30 million animal study showed. Its members want you to think that they know better and that the NTP results are untrustworthy.

Not long after details of the NTP experiment were released, Sweden’s Maria Feychting, ICNIRP’s vice chair, spread the word that it had methodological flaws. When she was corrected, Feychting clammed up. She never offered an explanation or an apology. Is this any different from those spreading 5G/COVID-19 rumors? Each acts on what they want to believe rather than what the facts show. Feychting’s machinations may be more damaging because she is backed by the full weight of the Karolinska Institute.

The second example comes from a report prepared for the Swedish Radiation Safety Authority by a nine-member panel of experts. Each year, the Authority commissions an annual update with the past year’s most important scientific developments on the health effects of EMFs and RF radiation. Van Rongen and Switzerland’s Martin Röösli, who is also on ICNIRP, are members of this panel. (Having ICNIRP’s seal of approval leads to invitations to sit on other advisory groups.)