France: During Full Confinement, an Anti-Nuclear Association Suffered the Wrath of the Gendarmerie

During full confinement, an anti-nuclear association suffered the wrath of the gendarmerie
by Pierre Bonneau (Reporterre), reporterre.net, 6 May 2020

On April 21, the premises of the Next-Up anti-nuclear association as well as the homes of its leaders were searched despite the confinement. The reason invoked - to recover protective equipment - seems very paltry to the people concerned and their supporters. 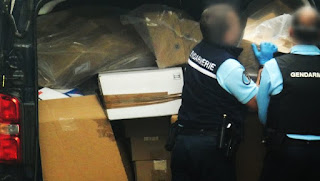 "They fell on us like in an ambush!" Almost a week after the incident, Serge Sargentini has still not recovered.  Living beside the Drôme River in the small quiet town of Crest, this head of the anti-nuclear association Next-Up did not expect, during full confinement, to be searched, handcuffed, and much of the material of his association seized, and to be held for twelve hours in police custody without respecting confinement measures when he is over 70 years old.

Tuesday, April 21, the septuagenarian spotted four gendarmes arriving by surprise, hiding next to the window of his room. "At 8:40 a.m., as we were leaving with my wife through the back door, they came upon us, announcing the search and entry by force. There were insults, spitting, pushing and shoving. Half of them were not wearing masks or gloves," says the retiree on the phone. The reason for the operation? A requisition of masks.

His association, Next-Up, held a stock of nearly 250 FFP3 masks - the Rolls Royce of respiratory protection, even more airtight than the FFP2. The association is accused of violating a requisition decree of March 23, 2020. "The gendarmerie was seized by the Drôme public prosecutor's office following a report from the national platform Pharos", explains Commander Thierry Chopard in Le Crestois. Next-Up is suspected of selling hydroalcoholic gel and masks.

Shameless trafficking in the midst of a shortage?" Not at all: it's a strategic stockpile in case of a nuclear accident! replies the activist.  We've had it for 15 years, we didn't wait for Covid!" Little known to the general public, the association Next-Up, "specialized in ionizing and non-ionizing radiation", campaigns against nuclear energy, Linky smart meters and 5G. Its activists have many full protective suits known as "NBC" (nuclear, bacteriological and chemical), which they wear during actions carried out at nearby nuclear power plants at Cruas and Tricastin.

"Everyone knows we have this equipment! Our actions are public," the retiree explains. All the more so, since from the start of the pandemic, these activists, already trained to act as guards against nuclear accidents, have redirected their activities. The association has sent parcels with protective material to its activists, who are often elderly, all over France. It also distributes free stocks of hydroalcoholic (organic) gel to health workers and local associations who request it.

This activity did not please the local gendarmerie. "After seizure of the masks, I thought it would end there. " But, around 9 o'clock, three plainclothes policemen arrived. They had just returned from the home of the association's vice-president, a 77-year-old radiologist with a history of heart disease, who was also searched when he was getting out of bed. "They told me that I had an unauthorized 'clandestine hydroalcoholic gel manufacturing laboratory'. They also mentioned 'covert work'!" he says. These charges were eventually dropped, but they provided the pretext for a large-scale seizure.

On his side, Serge Sargentini, handcuffed and sitting on a stool, watched for two hours as a large part of his association's material was seized, he says, without respect of the confinement measures. "They seized a computer, camera memory cards, hundreds of boxes of hydroalcoholic gels, as well as all the full and empty bottles, the complete stock of packaging bottles, dozens of 1-litre bottles of natural 90° alcohol, over glasses, NBC suits, etc." lists the activist. "They even seized Monopoly money that I use in my photo studio. They gave them back to me later, discreetly, it was so ridiculous. »

"This is ridiculous. If they had just wanted the masks, they would have sent a letter saying so."

The story doesn't end there. While the whole country is confined and visits to the elderly are strongly discouraged, two policemen continued the search of the retiree's home, "without it being included in their warrant," the activist says. "When they came out of the elevator, my 92-year-old sick mother-in-law approached them. They didn't know what to do because they weren't expecting it!"

The policemen entered the apartment, searching the cabinet of personal files, entering the rooms. "My wife has breast cancer: she hasn't been out for more than two months as a precaution. She was confronted by two policemen without gloves, only one wearing a mask, without respecting the safety distancing. One of the experts even tried to seize her laptop, which she uses every day to be in touch with our grandchildren."At the same time, the association's accountant's office was also searched.

Handcuffed in the street, Serge Sargentini was then taken to the gendarmerie. His hearing lasted four hours - this time from a safe distance, but the two officers were not wearing masks. He admitted possession of the masks and answered questions about his actions of solidarity. But the judicial police officers were also trying to access the codes of the computers seized, asking questions about the association's accounts. Finally, at 6:30 p.m., the prosecutor made a ruling: the activist walked out free, after agreeing to give the seized masks to caregivers. No charges have been filed for the time being.


"The whole thing is ridiculous. If they had simply wanted the masks, they would have sent a letter saying so," says Dominique Malvaud, a member of the national network Sortir du nucléaire. "Our association is legal. Next-Up had not received any notification of compliance with the decree. Otherwise, we would have given the masks", adds Serge Sargentini. "We can see that behind this, the police were looking for something else," continued Dominique Malvaud.

According to Mr. Sargentini, it is the association's involvement in the fight against Linky that is targeted. "They took photos of our measuring equipment. With our accounting system, they can now trace the equipment back to the suppliers who manufacture them especially for us," he says. However, during the hearing, the policemen didn't ask any questions about the activities of the association regarding Linky, or even 5G. "We know very well its involvement in other areas, and it is not at all in this context that we acted. We are acting on objective facts", defends the police commander Thierry Chopard.

"Was it for intelligence purposes? To better understand the nebulous
anti-nuclear world by entering their contact file?"

For Jean-Pierre Collet of Sortir du nucléaire Bugey, who also supported Next-Up, denial is not enough. "Was it for intelligence purposes? To better understand the nebulous antinuclear world by seizing their contact file?" The activist emphasizes the political implications of the operation: "This is the first time in recent years that a moderate, law-abiding national anti-nuclear association is searched. This sets a precedent. »

At a time when the Bure [anti-nuclear] movement is under massive surveillance, and a recent decree has strengthened the intelligence and tracking powers of anti-nuclear activists, this new search of a little-known and isolated association is emblematic. For Mr. Sargentini's lawyer, Jean-Pierre Joseph, "it is part of the move, this time in the name of the 'so-called health emergency', towards a form of democratic dictatorship".

Back home, Serge Sargentini had to undergo a medical examination after coughing for a few days after the search. Fortunately, the results were negative, as was the case for the vice-president who was also searched. He is now preparing a request for the return of the equipment.

Contacted by Reporterre by phone and e-mail, the gendarmerie of Crest did not answer our questions, "having no authorization to communicate on this matter", advising us to "get in touch with the public prosecutor's office in Valence, which may be able to accede to (our) request". The Public Prosecutor's Office in Valence did not respond to our call.