Technology: How much radiation are we exposed to? Who do I contact if I have a problem? A National commission wants the government to respond more quickly.
by Lise Bailat, Tribune de Genève, 20 May 2020 - translation 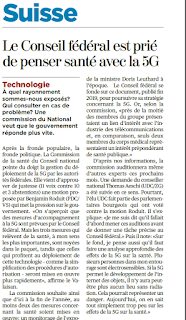 After the popular backlash, the political backlash. The Health Commission of the National Council points the finger at the federal government's management of 5G deployment. It has just narrowly approved (11 votes against 10 and 3 abstentions) a motion proposed by Benjamin Roduit (PDC/VS) that puts pressure on the government. "It is clear that accompanying measures for 5G are planned by the Federal Council. But the three measures that are relevant to health, in my view the most important, are buried in the package, while those that benefit the deployment of this technology - such as the simplification of authorization procedures - will be implemented more quickly," says the Valaisan.

The committee hopes that at least two of the health measures will be implemented by the end of the year: monitoring of radiation exposure and the creation of an environmental medicine consultation service.

According to the timetable presented by the Federal Administration, these developments were not expected before 2021-2022. Too late, according to elected officials. "I believe that 5G is indispensable. But there is no question of turning a blind eye to health either," emphasizes Benjamin Roduit. We must take appropriate measures, not to stop 5G, but to protect the population, especially hypersensitive people."

The National's Health Commission is also highly critical of the composition of the working group that drafted the "Mobile Telephony and Radiation" report on behalf of Minister Doris Leuthard at the time. The Federal Council is using this document, which was published at the end of 2019, as a basis for the continuation of its 5G strategy. However, according to the commission, "almost half of the members of the group had a link of interest with the telecommunications industry and, in comparison, only two members of the medical profession represented an overriding public health interest".

According to our information, the committee will even be hearing other experts in the coming months. A request by National Councillor Thomas Aeschi (SVP/ZG ) has been followed up in this respect. However, the SVP member is one of the parliamentarians who voted against the Roduit motion. He explains: "I thought it was necessary to hold these hearings before giving the Federal Council a specific task." Then he notes: "Basically, I also think that a thorough analysis of the effects of 5G on health should be done. Many people around me are electro-sensitive. If 5G enables the development of the Internet of Things, there may be no place left without radiation. This could be dangerous. Today we simply know too little about the health effects of 5G."

The Swiss Telecommunications Association reacts to this approach in a detached manner. "The industry has never been opposed to health-related measures. On the contrary, it has suggested that radiation monitoring should be introduced," explains its president, Peter Grütter. However, the committee's timetable seems ambitious to me."

He also points out that the federal report shows a consensus: there is no scientific proof that 5G poses a health risk. Swisscom director Urs Schaeppi recently pointed out that the latest studies also show no evidence of any harmful effects on health if international limits are respected.