As part of its actions to warn about overexposure to the thermal effects of smartphone waves (microwave-type heating effect), which are particularly risky for spermatozoa, the NGO Phonegate Alert advises users to avoid contact of cell phones or any other connected object (tablet, laptop, etc…) with the pelvic area. Never carry a cell phone in your pants pocket!

For Dr. Marc Arazi who presides over the association and who is at the origin of the revelations of the Phonegate health scandal:

“Public authorities must intensify scientific research on the risks of infertility related to the use of cell phones worn close to the body both in men and women and finally take into account the total lack of credibility of the specific absorption rate (SAR) as an indicator to protect health.”
Pusan National University scientists reveal links between sperm quality and cell phone use

PUSAN NATIONAL UNIVERSITY
NEWS RELEASE 24-JAN-2022
Cell phones have succeeded in bringing the world closer, making life tolerable during a very trying time. But cellphones also have their downsides. They can have negative effects on health. This is because cell phones emit radiofrequency electromagnetic waves (RF-EMWs), which are absorbed by the body. According to a meta-analysis from 2011, data from previous studies indicate that RF-EMWs emitted by cell phones degrade sperm quality by reducing their motility, viability, and concentration. However, this meta-analysis had a few limitations, as it had low amounts of in vivo data and considered cell phone models that are now outdated. 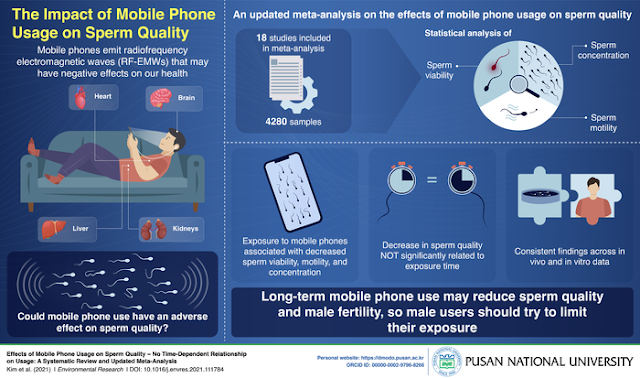 After examining a series of studies from 2012 to 2021, researchers have performed an updated meta-analysis that clearly indicates the connection between cell phone and decreased sperm quality. Credit: Pusan National University
In an effort to bring more up-to-date results to the table, a team of researchers led by Assistant Professor Yun Hak Kim from Pusan National University, Korea, conducted a new meta-analysis on the potential effects of cell phones on sperm quality. They screened 435 studies and records published between 2012 and 2021 and found 18—covering a total of 4280 samples—that were suitable for the statistical analyses. Their paper was made available online on July 30, 2021 and was published in Volume 202 of Environmental Research in November, 2021.
Overall, the results indicate that cell phone use is indeed associated with reduced sperm motility, viability, and concentration. These findings are more refined than those from the previous meta-analysis thanks to a better subgroup analysis of the data. Another important aspect that the researchers looked into was if higher exposure time to cell phones was correlated to lower sperm quality. However, they found out that the decrease in sperm quality was not significantly related to exposure time—just to exposure to mobile phones itself. Considering the results were consistent across both in vivo and in vitro (cultured sperm) data, Dr. Kim warns that “Male cell-phone users should strive to reduce mobile phone use to protect their sperm quality.”

Knowing that the number of cell phone users is most likely going to increase in the future, it’s high time we start considering exposure to RF-EMW as one of the underlying factors causing a reduction in sperm quality among the male population. Moreover, seeing how technologies evolve so quickly, Dr. Kim remarks that “additional studies will be needed to determine the effect of exposure to EMWs emitted from new mobile phone models in the present digital environment.” The bottom line is, if you’re worried about your fertility (and potentially other aspects of your health), it may be a good idea to limit your daily cell phone use.