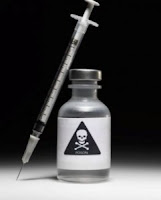 A referendum opposing the revised Epidemics Act has recently been launched by a part of the Swiss population. If this law were approved, the Swiss authorities could decide through the new law whether a health situation is exceptional and certain groups of people needed to be vaccinated (professionals, children etc.). These persons will no longer have a choice.  The referendum deadline is 17 January 2013.

Vaccinations do not prevent a substantial percentage of diseases. There is collusion with the pharmaceutical industry which has a strong presence in Switzerland.   From a legal point of view, vaccinations represent bodily harm. They are filled with heavy metals and other poisons. They have never been studied independently and through double blind tests, using placebos. They have many side effects. They have never been proven effective as a protective mechanism against disease. They are a massive charge for the immune system of a young person and his unprotected brain.

There was a similar debate regarding mandatory vaccination – and even medicating people prophylactically –  going on recently in Poland. In April 2012, Eliza Walczak addressed the Polish Senate Committee of Diseases. As a Jewish Holocaust survivor, she compares the new mandatory vaccine measures in Poland to Nazi crimes. We have already heard similar statements from experts about exposing large, vulnerable populations against their will, particularly children, to the electromagnetic radiation emitted by wireless technology. This is a serious violation of the United Nations Convention on the Rights of the Child and the Nuremberg Code (directives for human experimentation).

Following are extracts from Eliza Walczak’s address to the Polish Senate. (I’ve taken the liberty of paraphrasing and correcting some grammatical errors in the translation.) The Chairman of the Senate called her speech, “scandalous”. It was published on Jane Burgermeister’s site www.birdflu666.wordpress.com which is worth looking at.

I am a lobbyist on the cause of patient rights. I guarantee patient rights in accordance with actual medical knowledge. I represent here ordinary citizens, potential patients, who will have to obey the Polish law. The main problems with the law from 15 June, which changes the infectious disease law, deserve special understanding and exposure. At first glance, we see two very unsettling changes. These are: introduction of obligatory vaccination outside of the national protective vaccination program and introduction of obligatory drug taking – “prophylactically”. What is taking drugs “prophylactically” or a “pharma-prophylaxis” practice? Medicine knows a variety of prophylaxis, starting with avoiding threats, sports, good nutrition, and ending with taking supplements. Vaccines do not protect us from disease – we still could be sick after applying the vaccine, we just have better chances of surviving. In my opinion the statement, “prophylactic treatment” was used recklessly and could be used to define a therapy for chronic patients in order to further prevent worsening of the disease. However it cannot prevent a healthy human from becoming ill. A law has been passed that will force healthy people to take vaccines with substances that we know have side effects… Supposedly we are missing money for drugs for patients. So why in such a case are we allowing forced application of undefined drugs on healthy people? What do we do with the articles in the Polish Constitution that say, in article 38: “The Republic of Poland provides life protection for every human by law”? Article 39 of the polish Constitution: “No one can be subjected to a scientific experiment, including medical experiment (…)”.

I would like to appeal to the 40th article of the Polish Constitution: “Nobody can be subjected to torture, or to cruel, inhuman or degrading treatment and punishment. Corporal punishment is forbidden. Article 41: “Everyone has the right to personal inviolability and personal freedom. Freedom deprivation or restriction can be allowed only on the terms and procedures specified in this law”. And by passing this law that we are debating on, you are allowing to create the possibility of restricting freedom.

What is unsettling about this law? Firstly, change in the definition of infectious disease. This raises concern about enlargement of the vaccination obligation and it gives the right to declare an epidemic on trivial grounds, and as a result makes vaccination of every citizen an obligation. Secondly, it sets the obligation of protective vaccination on every citizen, not only children… There is no compensation if you report undesirable side effects. We see here an attempt to monopolize and restrict access to information about infections, infectious diseases and undesirable vaccination side effects. It is done by registering this information only in the payable system – “sentinel” and making this system available only to some institutions and prior to signing an agreement…

I’m a Jewish woman. I spent 10 years in Israel, I’m one of the authors of therapeutic programs, which are related to the new medicine, which has roots in the ancient medicine and tries to prevent pharmacy. Enforced treatment brings to our minds the holocaust. A problem is created, then, a solution is proposed… In these times, going with the spirit of miniaturization and modernization, natural threats are replaced with microbes grown in a laboratory, the nozzles of showers are replaced with syringes and toxic gas is replaced with living microbes in vaccines. This progress is easily seen with a naked eye… Nobody seems interested in medical doctors like doctor Rath from Germany, who presents the geneaology of the problem of the pharmaceutical vaccine business, referring us to the documents published in “Profit Over Life”. These are Nuremberg documents, which shows a link between today’s pharmaceutical companies that advocate vaccines and concentration camps in Auschwitz.

There is yet another difference between old and new ways of “healing” the Earth from an excess of people. During the holocaust, people were led under the shower by soldiers of the enemy. [part of the sentence is drowned out by the chairman of the committee].

Today, Polish people will be led under the syringe by a national policeman, under the consent of Polish senators and politicians. I’m asking on behalf of ordinary citizens that this won’t take place. This law is outrageous, almost everyone voted on it – only one representative from “PiS” voted against it.

Email ThisBlogThis!Share to TwitterShare to FacebookShare to Pinterest
Libellés : Vaccines