Warning to Young Women: Keeping a Cell Phone in the Bra Could Increase the Risk for Breast Cancer 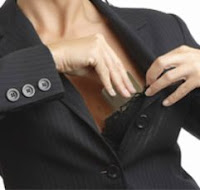 A number of young women keep their cell phones in their bra.  This is a very dangerous habit because the radiation a cell phone emits might increase the risk for breast cancer.  Watch the following 3-minute special report from KTVU.com. California, and read the article, whose author talked to Dr. Devra Davis, epidemiologist.  Dr. Davis has teamed with medical doctors from a breast imaging center and a cancer-testing laboratory who are preparing a case study report on four young women with no known family history or risks for breast cancer.  These women developed clusters of breast cancer in highly unusual areas after carrying cell phones in their bras for years.

Breast cancer in young women is on the rise in Geneva and throughout Europe.  Could this be one of the causes?  We tend to disregard these warnings, believing we are invincible, and that this is nonsense, however, most cell phone manufacturers warn in accompanying operating manuals that the phone must be kept at least half an inch from the body.

Newsclip:  http://www.ktvu.com/videos/news/special-report-keeping-cell-phone-in-bra-may-lead/vhPF8/ - one young woman (age 21) diagnosed with breast cancer, had to have her breast removed.

When you don’t have a purse or pocket but still want to stay connected to the world, nestling your cell phone into your cleavage for safekeeping may seem like a great solution. In fact, so many women now do this that there’s even a new type of bra with a pocket to hold a phone.

But beware: Stashing your cell in your bra is a dangerous habit—because the radiation it emits might increase your risk for breast cancer. After hearing about this concern at a recent medical conference in New York City, I contacted the conference speaker, Devra Davis, PhD, MPH, president and founder of Environmental Health Trust (EHT), an organization that provides research and education on cell phones and other environmental health hazards.

Dr. Davis has teamed with medical doctors from a breast imaging center and a cancer-testing laboratory. They are preparing a case study report on four young women with no known family history or risks for the disease who developed clusters of breast cancer in highly unusual areas after carrying cell phones in their bras for years. She told me, “Breast cancer typically develops as a single tumor in the upper outer quadrant of the breast, not in the center of the chest. But these cases all had multiple primary tumors in the outlines of where the cell phones lodged. And none of the patients had the known breast cancer mutations. So the tumor location, the young age, the multiplicity of tumors and the lack of genetic markers are all very concerning.”

Substandard standards: Cell phones have never been tested for radiation safety, only for their impact on temperature. Dr. Davis said that phones are tested to see how much heat they emit in two positions—held 10 millimeters (about three-eighths of an inch) from the ear…or carried in a holster on the hip and held nearly an inch off the body. However, both the skull and hip have thick bones, which don’t absorb radiation well. In contrast, fat does absorb radiation—and breast tissue is mostly fat. Furthermore, Dr. Davis added, recent studies find that cell-phone radiation that does not change heat can have biological impacts.

Dr. Davis is certainly not alone in her concern. In August 2012, the US Government Accountability Office released a statement saying that federal cell-phone radiation standards are outdated and may not protect public health…and recommending that the Federal Communications Commission review its current radiofrequency energy exposure limits.

Children at risk: Using cleavage to carry a phone seems to be particularly popular among teens and young women—and that raises additional worries. For instance, Jay K. Harness, MD, a past president of the American Society of Breast Surgeons, told me that he was especially concerned about cell phones’ potentially damaging effects on young girls whose breasts are still developing.

In addition, researchers from the University of California, Los Angeles, found a link between prenatal exposure to cell-phone radiation and behavior problems, such as hyperactivity.

For safer cell phoning…
Keep your phone off or in airplane mode (so it’s not sending or receiving signals) as much as possible. When your phone is simply on, even if not in use, it is emitting radiation.

Use a headset or speaker function as much as possible.

Check out EHT’s brand-by-brand warning lists here. Cell-phone manufacturers are required to provide guidelines on the safest ways to use and carry their phones, but they don’t always make these warnings easy to find.

Carry your cell phone in a purse or wear a hip holster—preferably in a pouch with radiation-blocking or diffusing material (for instance, such as those from www.LessEMF.com, www.PongResearch.com or www.RadiRid.com).

Whatever you do, keep that phone out of your bra!

Sources: Devra Davis, PhD, MPH, is an epidemiologist and president and founder of the Environmental Health Trust, an organization that provides research and education on environmental health hazards. She also was the founding director of the Board on Environmental Studies and Toxicology of the US National Research Council of the National Academy of Sciences and is the author of Disconnect: The Truth About Cell Phone Radiation, What the Industry Is Doing to Hide It, and How to Protect Your Family (Plume). www.EHTrust.org

Source: Jay K. Harness, MD, is a clinical professor of surgery at the University of California, Irvine, a practicing breast surgeon at the St. Joseph Hospital Center for Cancer Prevention and Treatment in Orange, California, and a past president of both the American Society of Breast Surgeons and Breast Surgery International. www.DrJayHarness.com