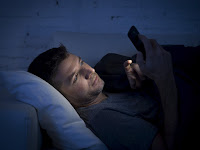 Transient smartphone blindness (TSB) is a real phenomenon and may contribute to a neurologic misdiagnosis in clinical practice, a new case report suggests.

Published online January 18 in Neurology, the "Clinical/Scientific Notes" discuss a middle-aged woman who reported temporary, painless monocular visual loss after using a smartphone while lying on her side in bed.

This follows two cases reported in 2016 by UK researchers in the New England Journal of Medicine (NEJM) of women, aged 22 and 40 years, who also had recurrent monocular vision impairment immediately after in-bed smartphone use.

The current investigators point out that their patient initially received a false diagnosis of multiple sclerosis (MS) and was advised to start a disease-modifying treatment.

Dr Wingerchuk added to Medscape Medical News that with the ever-increasing use of smartphones, cases of TSB are likely to grow, so it's important for clinicians to ask about such things as when and where vision problems occurred.

"This phenomenon is certainly unusual. It's not known if it's underreported by patients or underrecognized by physicians. Regardless, if you have a patient who complains of loss of vision in one eye, getting complete details is important," he said.

"In this case it's clearly the use of the smartphone, body position, and amount of ambient light that are clues to smartphone blindness."

TSB symptoms are caused by "temporarily discrepant light adaptation levels between the 2 retinae," write the investigators.

They report that their female patient was 58 years of age and, except for her TSB symptoms, was otherwise healthy. She came to the clinic after experiencing two episodes of transient right monocular visual loss.

Each time, the patient had laid on her left side in bed after awakening in the early morning hours and used her smartphone for approximately 10 to 15 minutes. She did not use any light other than what was provided by the phone.

Once the woman stood up, the vision in her right eye suddenly blacked out for about 15 seconds and then returned within a minute later. She noted that the episodes didn't cause any pain.

"There were [also] no accompanying neurologic or orthostatic symptoms," and the patient "had no history of migraine, ophthalmologic disorders, or cerebrovascular risk factors," write the researchers.

The woman's visual acuity and other ophthalmologic tests were negative and both cardiovascular and neurologic exams showed nothing abnormal.

Although brain MRI showed some bilateral cerebral white matter lesions, cervical and spine MRIs (as well as cerebrispinal fluid and metabolic/inflammatory disorders) were normal. Still, she was given a diagnosis of MS by one neurologist.

At the 6-month follow-up, another brain MRI showed no changes and, after showing normal head and neck magnetic resonance angiography, TSB was finally diagnosed.

"The current case confirms TSB as a clinically relevant physiologic phenomenon that should be included in the differential diagnosis of painless transient monocular visual impairment," they write.

Dr Wingerchuk added that it also highlights that misinterpretation of symptoms "can lead one down the wrong diagnostic path."

In the case study published in NEJM, the older patient had experienced recurrent monocular visual impairment for 6 months, with each episode lasting up to 15 minutes after waking. The younger woman had the impairment in her right eye for several months.

After each gave detailed histories at a neuro-ophthalmic clinic, it was discovered that both had viewed their smartphones while lying in bed — with symptoms only in the eye contralateral to the lying-down side.

Interestingly, further research showed that visual sensitivity was reduced in two of the investigators after they viewed a smartphone at arm's length while in the dark. Recovery occurred after several minutes.

"Our cases show that detailed history taking and an understanding of retinal physiology can reassure both patient and doctor and can avoid unnecessary anxiety and costly investigations," they write.

Dr Wingerchuk added that the new case highlights 3 of the main factors linked to a misdiagnosis of MS:


"Diagnosis of MS or clinically isolated syndrome requires at least one attack plus objective findings comparable with CNS demyelination," write the researchers, adding that their patient's symptoms being brief and painless were also "not compatible with demyelinating optic neuritis."

"Overreliance on MRI results and inappropriate anchoring…are among the heuristic pitfalls relevant to this case and MS misdiagnosis in general."

Dr Wingerchuk reports receiving research support from Alexion and TerumoBCT and personal compensation for consulting services to MedImmune and for services as the co-editor-in-chief of The Neurologist. Sathiamoorthi has disclosed no relevant financial relationships.