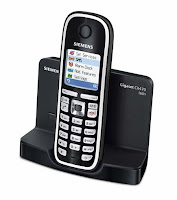 We are posting this article because most people do not know that cordless DECT phones emit very high levels of electromagnetic radiation.  ECO DECT cordless phones, which emit less radiation, are available in Europe, but are rare in the United States.  I am electrosensitive and for a long time, my neighbor's DECT phone was emitting very strong radiation which affected my health.  This seems to have changed, however, in my small building (with only 3 apartments on each of the 7 floors) we have picked up over 10 different Wi-Fi signals, some very strong.

The author advises that the best option is to USE A CORDED PHONE. "Think twice about deploying your own WiFi network, which will add to the radiation. At least turn it off when you are sleeping," advises this article, [and I would add, when not in use.]

Did you know that (DECT) 1.9Ghz digital cordless phones emit the same type of pulsed microwave radiation (about 1.8 GHz) as ordinary (GSM) cell phones. Emissions can be about 6 V/m within a metre of the base unit, for as long as it is plugged in. Companies push these phones because they do not interfere with Wifi networks. Many base stations emit their radiation even when the phone is not in use! Microwaves are continuously emitted 24 hours a day as long as they are plugged in. Not good. Details – More Warnings. – “DECT cordless phones work at a fixed power. Mobiles turn their power down to the lowest level possible, so when you are near a base station this can be much lower than a DECT cordless. DECT pulses are far more aggressive than for mobiles.”

Only the 3rd generation DECT models will not emit radiation continuously. These new models also adjust their power output depending on how far away the base station is from the handset. We could not find US cordless phone models that mention this issue. This is a big deal in Europe.

This wireless technology is now the main one being used on most cordless phones in the US. 5.8Ghz cordless phones have faded away. There are issues with these DECT cordless phones constantly transmitting even when not in use. It is especially concerning if you put a cordless handset next to your bed. Always err on the cautious side.

What to look for in a cordless phone
- Reduce the transmitting power of the Siemens Gigaset ECO Mode Plus Phone’s base station by 80% simply by selecting the ECO DECT Mode.
- Energy saving ECO Mode Plus for 100% reduction of transmitting power when the handset is idle or charging.
- “The international limits for radio wave transmission ensure that there are no risks. Our products fall well below these recommended limits. Even though there is still no scientific evidence that radio waves emitted by DECT phones are harmful, SHC’s approach is to equip all its Gigaset phones with functions that enable the automatic or manual reduction of transmitting power.”
- The energy-saving power supply of the Gigaset ECO Mode Plus Phone’s uses up to 60% less energy.

If you have an old DECT phone, you may want to upgrade. We use 5.8Ghz phones to avoid this issue. Amazon still sells a bunch of 5.8Ghz cordless phones.

Some Panasonic DECT Cordless phones feature an Intelligent Eco Mode that automatically lowers the power consumption when you are using the handset close to the base unit or while the phone is not in use. This is better at reducing radiation, but not great. We recently tested one that has aECO indicator on the handset. This light remained on while handsets sat in their cradle.

Other cordless phone manufacturers do not even mention these radiation issues. When in doubt, use a corded telephone.

DECT technology is now the main one being used on most cordless phones and is now being used for Baby Monitors. It is especially concerning because a baby monitor is almost constantly transmitting. Another concern is that you place the baby monitors next to your bed and your baby’s crib. This issue is getting press in the UK, not in the United States.

How much constantly emitted radiation is safe? Let the experts debate it, we do not even want to worry about it.

We suggest avoid DECT baby monitors and stick to the old style 900Mhz baby monitors. Turn the baby monitor OFF when you absolutely do not need it. Station the monitors at least 10 feet from both beds.

Think twice about deploying your own WiFi network, which will add to the radiation. At least turn it off when you are sleeping.