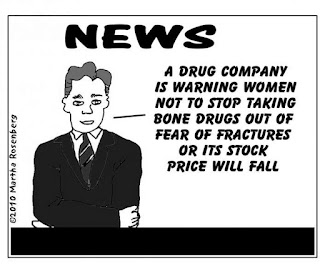 On 17 May 2017, the Swiss newspaper Tribune de Genève published an article on the side-effects of denosumab (Prolia), a medication widely prescribed in Switzerland against osteoporosis. Swissmedic, the Swiss drug authority, has just issued a warning that this new medication could provoke "multiple spontaeneous vertebral fractures" when treatment is stopped. Switzerland is one of the first countries to signal this. Some 10,000 persons in Switzerland are being treated with this medication.

Ten people were hospitalized with the skin infection cellulitis during trials and one died.

But the FDA approved Amgen's Prolia (denosumab) in 2010 to prevent fractures in women with osteoporosis, two months earlier than expected. Why?

No one seemed to notice that the FDA clinical reviewer Adrienne Rothstein, MD had stated that Prolia denosumab "has the potential to affect multiple layers of the immune system" before its approval and that "three subjects required hospitalization for pneumonia after a single dose.” This is a great new “treatment option”?

The bone drug market opened up for the drug industry 12 years ago when the hormone replacement drugs women were taking to prevent fractures were found to increase their risks of cancer and heart disease. Bisphosphonates like Fosamax and Boniva (the latter, advertised by actress Sally Field) were quickly substituted as a way for women to keep their bones strong and stay young looking. But soon they revealed risks of their own. In addition to intractable pain, atrial fibrillation and causing (not preventing) atypical fractures, bisphosphonates were linked to jaw bone death (osteonecrosis) and esophageal cancer.

Soon Prolia began to appear no safer than the bisophosphonates though it belonged to a different class of drugs. A monoclonal antibody derived from genetically engineered Chinese hamster ovary cells, Prolia carries warnings like other “MoAbs” about opportunistic infections, anaphylaxis and worse.

Two years after its approval, Amgen issued warnings that Prolia could cause serious risks like "hypocalcemia, serious infections, suppression of bone turnover, including osteonecrosis of the jaw” as well as “atypical femoral fracture” and “dermatologic adverse events." Notably, these are the same risks bisphosphonates bone drugs pose. Six months ago the International Journal of Clinical and Experimental Medicine also reported osteonecrosis of the jaw with Prolia.

Everyone has heard of "mission creep." In the pharmaceutical world, “approval” creep means getting the FDA to approve a drug for one thing and pushing a lot of other drug approvals through on the coattails of the first one.

But there is another, more insidious creep seen with drugs like Prolia- "warning creep": acknowledging new and alarming warnings after a drug is approved and in wide use.

Like so many expensive drugs aggressively marketed today--Prolia cost roughly $1650 a year—a risky drug made billions despite its risks, which were clear when it was first approved. Prolia “provided Amgen with $884 million in US sales between 2011 and 2013 and $1.4 billion worldwide for this same stretch,” reported Medical Marketing & Media.

Critics of the drug industry have often accused drug makers of building injury settlements into their business and marketing plans in blatant disregard for patient health. A drug like Prolia suggests they are right.