March 24, 2018: A new Italian publication (in press) confirms results obtained by the recent U.S. NTP (National Toxicology Program) research that rats exposed to radiation from a cell phone develop tumours. In both studies two types of tumours were detected: Schwannomas of the heart and glial cell tumours in the brain. These two studies are receiving a lot of attention by scientists on both sides of the cell phone divide: Those who believe this radiation is harmful and those who believe it is safe.
NTP Report
NTP Technical Report on the Toxicology and carcinogenesis studies in Hsd:Sprague Dawley SD rats exposed to whole-body radio frequency radiation at a frequency of (900 MHz) and modulations (GSM and CDMA) used by cell phones. NTP TR 595 March 2018.

Here are my Comments on the Ramazzini Report …

Havas: One mistake people make is they look for that ONE study that is going to be so persuasive that no one with two or more brain cells firing will be able to disagree with the conclusions.

The evidence in the Ramazzini study is important, but it isn’t until it is combined with other studies that it becomes powerful.

In research, one of the most powerful results is confirmative evidence. By this I mean studies that are pointing us in the same direction using different tools, different locations, different subjects …

We use three primary tools in health/pollution research: epidemiological studies, in vivo studies, and in vitro studies. They all have their strengths and weaknesses. However, when they all point in the same direction they provide very powerful scientific evidence.

The epidemiological studies are conducted under realistic conditions, using human subject (mostly) and show an association between an agent and an outcome. In this case the agent would be microwave radiation and the outcome would be cancer.

The in vivo studies are with living specimens (seldom humans) and are conducted in artificial, highly controlled environments and show a cause-effect relationship as only one parameters is altered at a time.

The in vitro studies (in glass) are similar to the in vivo studies but they look at cells, organelles, biochemical reactions, etc. and provide evidence for a mechanism.

When all three types of studies point in the same direction then we have more confidence in the results.

Each of these studies have their weaknesses and often when someone doesn’t like the results they focus on the inherent weakness in the type of study being performed (like … study was with rats not people; experiment was under artificial conditions; what happens in a test tube may not happen in a living organism; there could be confounders that were not considered; etc.)

The real value of the Ramazzini study is that it confirms the results in the NTP study as both showed an increase in two types of tumours Schwannomas of the heart and malignant glial brain tumours. We have additional evidence from epidemiological studies that these two types of tumours (various types of brain tumours) and schwannomas (in this case vestibular schwannomas that affect the ear rather than the heart) as an acoustic neuroma are higher in people who use cell phones. We also have scientific evidence showing that RFR causes an increase in free-radicals that can cause cancer; that it causes increased permeability of the blood-brain barrier, that it interferes with calcium biochemistry, etc. So, we have three types of studies pointing in the same direction. The tumours occur in humans under natural conditions; they occur in lab studies with rats at levels below existing international guidelines; and they occur in lab studies providing various mechanism (free-radical damage being only one probable cause). See: When theory and observation collide 2017.

Also, the NTP study is not the first but the second major study of microwave radiation and cancer in rats as the first one was conducted by Chou et al. in 1992. They found an increase in various tumours, especially primary tumours, for rats exposed to 2.4 GHz frequencies. It is the combination of studies that is important and all of these studies can’t be wrong!

So we now have three large, well-controlled laboratory studies conducted by the U.S. Air Force, the U.S. National Toxicology Program, and the Ramazzini Institute showing that exposure to microwave radiation at levels below existing guidelines causes cancer in rats.

Another mistake that people make is that they focus on the highest exposure. If you look at the data in the Ramazzini study, there are higher occurrences of tumours at the lower exposures and these are basically ignored because they are not “statistically significant”. These tumours are rare so when only a few rats develop them we tend to ignore the results. However, if you combine all the exposures and compare them to the controls you get a slightly different picture and this is what the Chou study did as well.

I did a recalculation from their tables and here are the results. I don’t have the raw data for a statistical analysis but I would expect it to be statistically more robust as there is a larger sample size when the RF exposed animals are combined. 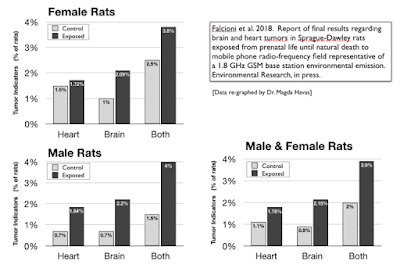 The exposed rats appear to have a higher incidence of tumour indicators than the control rats and this is true for both males and females, although more obvious in males.

The time has come for IARC (International Agency for Research Cancer) and the WHO to reconsider its classification of radio frequency radiation and change it from a class 2b (possibly carcinogenic) to either a class 2A (probably carcinogenic) or a class 1 (carcinogenic to humans). These three large and well conducted rat studies (U.S. Air Force, NTP, and Ramazzini Institute); the many studies documenting the various mechanisms involved in RFR and cancer; and the epidemiological studies documenting cancers among cell phone users and among those living near cell phone, radar, and broadcast antennas clearly indicate that RFR is more than just a “possible” carcinogen.