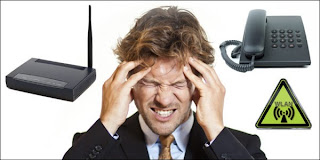 This is about to change: The federal government is currently studying options for systematic measurements. "There are plans to build a monitoring system. In future, the total load from all sources will be recorded, "confirms Jürg Baumann, Head of the Non-ionizing Section in the Federal Office for the Environment (FOEN).

Radiation interacts with the nervous system

Also an ETH (Federal Polytechnic School) expert, Gregory Dürrenberger of the Research Foundation for electricity and mobile communications (FSM) is in favor of more comprehensive measurements. "A meaningful monitoring system should equip an individual for 24 hours with sensors and record emissions." Although Switzerland currently has a legal electrosmog limit of 4 or 6 volts per meter for mobile telephony and regulations for power lines, electric railways, mobile phone antennas, radio and TV or radar, private sources are not recorded.

This plays a big role: "The electromagnetic pollution in homes is greater than the average citizen publicly produces", Markus Lauener, president of the electrosmog umbrella organization for Switzerland and Liechtenstein (Dachverbandes Elektrosmog Schweiz), is convinced. "One is irradiated from TV, Wi-Fi and cordless telephones of neighbors. And from our own devices. "

If the measurements obtained by the federal government reach critical values, it is clear what needs to happen. "On each household appliance there must be an indication of how much radiation it emits." The current limits are based on economic rather than scientific knowledge. Peter Schlegel, ETH engineer, and representatives of electrohypersentivie persons (EHS) want to have only 1.5 volts per meter measurement in homes for WLAN (Wi-Fi).

For Hans-Ulrich Jakob of Gigahertz, a trade organization for non-ionizing radiation, such measurements are alarming. "My fear is that many people in offices suffer from electrosmog without knowing it," As the radiation causes a general weakening of the immune system, susceptibility to various diseases results.

The Green Party National Councillor Yvonne Gilli will soon bring the issue back on the political scene: "There is an urgent need for regulation of devices close to the body. There are still no limits for induction cookers and Co." She plans to contact the relevant authorities to work together to formulate a way forward. In addition, citizens should be educated: "People do not know enough about how they can reduce exposure to electromagnetic pollution in their homes through significant precautions and practices."

Knowing how much radiation we are exposed to every day will still take time. The establishment of a monitoring system by the federal government will take a few years according to Jürg Baumann of the FOEN.