Roger Federer wants us to believe that he doesn't have wifi at home for his virtual glasses, and it is now clear for whom Donald Trump is defending interests. 5G is imposed on us like force-feeding geese.

However, I see in 5G an opportunity, the opportunity to unite, all together. Yellow vests, climate demonstrators, the electrohypersensitive (EHS), all ages from all walks of life have a common cause here.

Because in the end, 5G is symptomatic of our society, of the exhaustion of our old democracy. The commune says to refer to the canton, the canton to the confederation: a devious form of dictatorship in three layers! Politicians are the bedrock of industrialists. They have only one word in their mouths: growth. 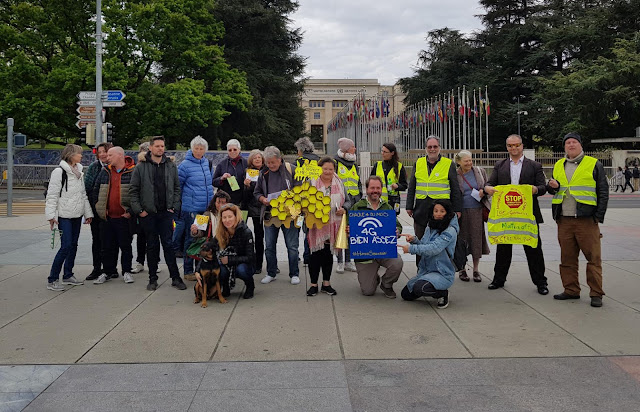 The confederation sold its body for 380 million. The moratoriums of the cantons were flouted the very next day, and Bern strongly recalled that they had been... fooled. The Bear, no more, no less, prostituted itself.

However, the health impacts of mobile telephony have already been demonstrated in many studies. For example, clear damage has been shown to hereditary material, so it will be our grandchildren who will pay the high price. This example is given here because it comes from Swisscom itself, in a patent published as early as 2003. We must speak here of a crime against humanity, of ecocide.

Because the impact on fauna, flora and the environment in general is undeniable. The unbridled energy consumption that will be generated in addition is in itself an aberration, at a time of climate change.

More simply, we can talk about well-being. Should we suffer from headaches, sleep disorders, under the pretext that it does not lead to cancer?

Everything is done today to prevent smoking, the consequences of asbestos and noise pollution. Nothing for mobile phone antennas. However, the harmful effects of smoke, asbestos and traffic are confined to time and space. Telephony is 100% of the territory, 24 hours a day, 7 days a week. It affects infants to seniors, people without a voice, endangered insects, animals, plants, all living things.

No one needs 5G. The increase in data volumes so much highlighted is only the consequence of the "unlimited" subscriptions that have become the norm, even at the lower end of the market. The connected fridge can be connected by cable, and the autonomous car, cyber-guided to be exact, will no longer be connected at the first serious accident. 4G offers sufficient flow rates.

When it comes to security, optical fiber is much more tamper-proof than wireless. It does not harm health, is much less energy consuming, for a similar flow rate. A technology of the 1970s, fiber is still not widespread throughout the country half a century later. Operators have other priorities....

Clearly, the authorities no longer work for human beings. Democracy is limited to electing politicians who no longer have vision or even power. The sovereign has become a memory.

Every 4th of the month, many of us meet in the Place des Nations. Let us rely on ourselves to build the paradise we deserve. Together, let's say loud and clear that 4G is enough!