Dr. Sasco began her presentation on the causes of childhood cancer by describing the increase in the cancer burden in the world:  12.68 million new cases per year.  Childhood cancer rates have been increasing in Europe at about 1% per year for the past 25 years.  “Survival has been greatly improved, but too many children still die and all of them suffer much too much” from the disease and treatment.

Why is cancer increasing?  It is doubtful that better screening is the reason.  For instance, we do not screen children for cancer.  Is it genetics?  No, she said, “Cancer genes do not change over a 50-year period.”  It could be epigenetics, the interaction of the genome and foetal exposure to toxins in the environment and also, in part, life-style.  Environmental toxins include:  chemical, physical, biological caricinogens in air, water, food, soil, objects of daily use in the home, school, and general environment.

It is difficult to identify the precise compounds which are carcinogenic.  We must evaluate low dose effects, cumulative exposures and the potential interaction between the many low dose agents.   The foetus is the most susceptible to these toxins and also the periods of pre and “peri”-puberty.

Dr. Sasco then discussed prevention.  There is the possibility of genetic intervention, however, what in fact does one do, once genetic susceptibility has been identified?  There are also medications, vaccines, such as HPV, which is more useful administered to persons in countries in the South, and vitamins and supplements.

Regarding pharmaco-prevention, chemo-preventive drugs could be prescribed to healthy women, for example, to young women to prevent breast cancer and even to postpone the age of puberty.  She then cited the words of Peto et al (1991), “the possibility of discovering anti-cancer drugs to be prescribed rather than carcinogenic substances to be proscribed (like Tamoxifen, used to treat breast cancer and a known carcinogen) is tempting.  More people are ready to accept prescriptions rather than restrictions.”  That is, “it’s easier to pop pills rather than change one’s lifestyle and the pharmaceutical industry will be happy about that!”

One can also avoid the risk factors for cancer.  We can help individuals to adopt the most adequate health behaviors and also provide knowledge which can be used by decision-makers (including governments and multinationals) for protection of populations.  We need to work with charismatic persons, like Dr. David Servan-Schreiber (who died in 2011 from brain cancer), to deliver the message of prevention.

What do we do about environmental exposures:  air pollution, hormone residues and other growth promoters in industrially produced meat, pesticide residues, genetically-modified organisms, ELF (extremely low frequency) and EMF (electromagnetic field) waves?  We should apply the precautionary principle to laws and regulations. 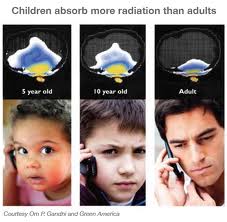 Dr. Sasco then described the evaluation of carcinogenicity undertaken by the IARC (International Agency for Research on Cancer) where she worked for 22 years.  She said that ELF and EMF should have been classified in group 2A – probably carcinogenic to humans, instead of group 2B – possibly carcinogenic.  She showed the slide of the impact of a cell phone on the brains of an adult and children of 10 years and 5 years.  Penetration of the waves goes deeper into the structure of the brain.  The younger one starts using a cell phone, the higher the risk of cancer.

She went through the results of several cell phone studies, including the Interphone Study.  “We have enough evidence regarding cell phone risks,” she said.  “The absence of absolute proof does not mean absence of risk.  There is an absolute need to inform populations, politicians, industry and media regarding children’s susceptibility.”  We must apply the precautionary principle:  limit the use of cell phones, use wired land lines whenever possible, keep the phone away from the body and protect children and fetuses.  The EMF waves from cell phones also have an impact on the quality of sperm and thus, on future generations.

She concluded with the words from the Hippocratic Oath, “Primum non nocere” – “First, do no harm”.  “We need to apply this today.”
Publié par Meris à l'adresse 8:47 AM