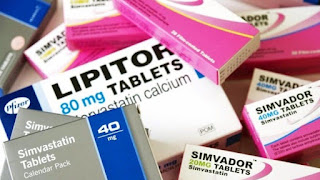 UPDATE (18 May 2012):  On 16 May 2012, the Television Suisse Romande (RTS) showed a documentary on statins as part of its health program "36.9". Worldwide, pharmaceutical companies earn $30 billion per year from the sale of statins. AstraZeneca, producer of Crestor, is the 5th largest pharmaceutical company in the world, representing total net sales of $33 billion per year, 17% of which is earned from statins. Originally developed for a specific cholesterol problem, diagnosed family hypercholesterolemia, these drugs are prescribed to millions more persons in the world: 20% of Americans take statins and 10% of Swiss. Insurance companies in Switzerland are paying out some $160,000 million per year for statin prescriptions without questioning their effectiveness or serious side effects.

Pfizer, which makes the number one statin drug on the market, Lipitor, whose patent is soon to run out, is pursuing a patent extension to test the drug on 30% of children for a period of six months in the European Union "in order to improve their health". This would represent $5 billion in added profits for Pfizer.  Children should not be prescribed statins at all, let alone have their cholesterol level measured. Pharmaceutical companies will not finance studies of lifestyle vs. statins because they already know that lifestyle changes would prove far more beneficial to health than the taking of statins.  As the patents of more and more lucrative brand name medications begin to run out, pharmaceutical companies are making deals with insurance companies in the United States to stop them from covering less expensive generic brands and pay for the more expensive ones instead.  Pfizer is in the lead with this strategy, stopping many insurance plans from covering atorvastatin, the generic brand for Lipitor.


UPDATE (7 March 2012):  On 28 February 2012, the United States FDA (Food and Drug Administration) added new safety alerts to the prescribing information for statins, citing rare risks of memory loss, diabetes and muscle pain.  It is the first time that the FDA has officially linked statin use with cognitive problems like forgetfulness and confusion.  Among the drugs cited are Lipitor, Zocor, Crestor and Vytorin.  Reports about cognitive problems span all statin drugs and all age groups of patients.  In 2011, nearly 21 million patients in the U.S. were being prescribed statins.  Ref:  Article from New York Times, 28 February 2012:  "Safety Alerts Cite Cholesterol Drugs' Side Effects".

UPDATE (10 January 2012):  Today, the People's Pharmacy sent this health alert:  "The evidence continues to mount that statin-type cholesterol-lowering drugs prescribed to prevent heart disease may spur the onset of type 2 diabetes. The latest research comes from the Women's Health Initiative, an enormous study of more than 150,000 postmenopausal women that began in the mid 1990s. In the decade between the start of the study and 2005, more than 10,000 of these women developed diabetes. The researchers calculate that women taking statin drugs such as atorvastatin (Lipitor), rosuvastatin (Crestor) and simvastatin (Zocor) were 48 percent more likely to be diagnosed with this metabolic condition." The study was published online on 9 January 2012 in the Archives of Internal Medicine.

Statins may save lives by preventing heart attacks and strokes, but only for people with clearly diagnosed heart disease. Even this health benefit is being questioned, as more and more independent investigations are revealing falsified statin test results.  Many more persons (about 75% of persons for whom they are prescribed), take them only for elevated cholesterol levels or as a preventive measure. The benefits of taking statins in this case, especially for women, are not that significant to offset the risks. Cholesterol is not an evil toxin for the population at large and high levels are not a serious risk factor. There has been no proven net health benefit when taken as a preventive measure. A 2010 analysis of 11 clinical trials involving 65,000 people produced no evidence that statins saved lives (Archives of Internal Medicine – June 28, 2010).

Side effects of statins include:
- Muscle pain and weakness. This occurs in as many as one-third of persons taking statins and most doctors ignore patients who complain of this side-effect. Muscle weakness can also affect the eyes.
- Elevated risk of type 2 diabetes, especially with Lipitor (9% risk increase = 1 out of 255 men and women taking statins)
- Memory problems (irritability, depression)
- Cataracts (in one recent study of 200,000 persons taking statins, 1 in 40 women developed cataracts)
- Fatigue
- Digestive distress
- Liver problems
- Kidney failure

Here is the testimony of a man who had been taking statins (simvastatin – trade name Zocor), who was diagnosed with rapidly progressive Alzheimer’s.  He had been a faculty member in three departments of a major university.  Since taking stains, he lost the ability to recognize people he’d known for decades and to read more than a page of text at a time.   Then, he applied to enter a clinical trial testing a new Alzheimer’s drug.  Before entering the trial, he stopped taking the statins.  When he arrived at the university conducting the trial, the doctors in charge told him he did not have Alzheimer’s.  Two years later, his “Alzheimer-like” symptoms completely disappeared.  He was back to reading three newspapers daily.  (Ref. “The Other Drug Problem” by Pamela Weintraub, published in Experience Life, April 2011).

In June 2011, the U.S. Federal Drug Administration (FDA) warned that people should not take the 80 mg. dose of simvastatin (Zocor, Vytorin, and generic) after a clear link was found between that dose and muscle pain as well as rare but potentially deadly muscle damage. The danger was greater in older women.

Patients should be informed about the risks and play an active role in deciding whether or not to take statins. Once prescribed, some patients are advised to take them for the rest of their lives. There are other, healthier ways to lower cholesterol and reduce risk of heart attack: quitting smoking, exercising regularly, contolling high blood pressure, losing weight, raising good cholesterol levels, eating healthier diets.

A disturbing trend in the pharmaceutical industry’s quest for profit is prescribing statins to children who have elevated cholesterol levels. Children are still developing and may be more sensitive to the drug’s side effects. Lowering a child’s cholesterol level without drugs by improving his/her diet and increasing physical activity is vastly preferred to prescribing statins.

We should look beyond prescribing medications to the environmental factors which cause the diseases for which drugs are taken: our industrial food supply and the chemical toxins which are creating an epidemic of obesity and other chronic diseases. Sadly, this is not the case. The pharmaceutical industry is driven by greed. Direct to consumer advertising should be banned in countries where it is allowed. We must educate ourselves to the potential dangers of drugs and pressure our authorities to impose stricter regulatory legislation on the industries which are polluting our environment.