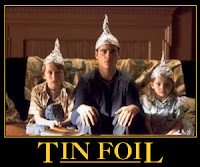 "Could the guys in the tinfoil hats be right?"  They well could be … since taking the advice of an EMF expert to place aluminum foil beneath my rugs in the places where the radiation emitted from neighbors’ cordless DECT phones and Wi-Fi is highest, my body and mind are less stressed: I am sleeping better and have more energy . My suffering lasted over 3 years.

Could the guys in the tinfoil hats be right?

As society's dependence on wireless technologies grows, the concern that there are health risks attached to the saturation of the air with high-frequency radio waves (RF) is not going away, despite official claims those fears are groundless.

Symptoms include stabbing headaches, "brain fog," tinnitus (a ringing in the ears) and extreme fatigue.

The Post says Bray's clinic may be the only mainstream health facility routinely treating patients for what's being called electromagnetic hypersensitivity.

"Every year we are getting more and more people coming in," Bray told the Post. "I'm very concerned, because the stories are very, very compelling … These are not crazy people. There is a huge, huge problem."

Bray is urging a rethink of our use of telecommunication and computer technologies, including moving back toward hard-wired devices.

Studies have found no link between the symptoms Bray sees with RF exposure. In its web page on Wi-Fi equipment, Health Canada acknowledges some people have raised health concerns but "there is no convincing scientific evidence" low-level RF exposure causes adverse health effects in people.

"You have to be very careful as a scientific, medical authority figure that you don't provide an outside reinforcement of beliefs that might be quite sincere, but lack scientific evidence," Dr. Ray Copes, environmental health director with the Ontario Agency for Health Protection and Promotion, told the Post, referring to Bray's diagnoses.

"You don't want to reinforce disability, and you don't want people to put themselves in tighter and tighter boxes with regards to their daily activities."

But there's been enough conflicting data to nurture people's doubts.

Bray said that five years ago she saw no hypersensitivity patients but now treats dozens a year. Typically her patients tell her the symptoms lessen or disappear when they get away from RF sources.

"Everybody in the person's family thinks the person is going crazy," she told the Post. "Then they'll start putting one and one together and they look around and [during an illness episode] somebody is doing this in close proximity; somebody is texting or talking on the cellphone."

Some of her patients suffer from other medical problems such as heart disease, Lyme disease or an ear injury, which she believes may make them more susceptible to hypersensitivity.

In British Columbia, opponents have fought B.C. Hydro's installation of smart electric meters because they use Wi-Fi connections to transmit data periodically.

The Wi-Fi transmitter on Hydro's smart meters will operate for less than a minute a day, he added.

"Is that worth getting wrapped around the axle on?"
Publié par Meris à l'adresse 12:00 PM