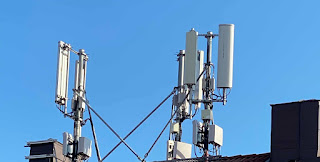 This study was first published in the Swedish medical magazine Medicinsk Access no. 1/2022 and was carried out by the oncologist and researcher Lennart Hardell from the Research Foundation for Environment & Cancer and Mona Nilsson from the Radiation Protection Foundation.  Our post of the English auto-translation of the study has since had nearly 11,000 views.  On 10 January 2023, the study  "The Microwave Syndrome after Installation of 5G Emphasizes the Need for Protection from Radiofrequency Radiation" was published as a case report by Gavin Publishers.
On 18 January 2023, Children's Health Defense (CHD) published an article including mention of the study, quoting one of its authors, Mona Nilsson as saying, “The telecom companies tried to censor the article” in spring 2022 after the study initially appeared in a Swedish medical magazine.

“A representative of the Ericsson company — the world leading 5G infrastructure provider — and the umbrella organization for 1,200 tech companies, all the major telecom companies in Sweden, wrote to the editor of the Swedish magazine and asked him to withdraw the article,” she explained.

“This is the first case report of the microwave syndrome caused by 5G,” Hardell told The Defender (CHD), adding that “historically, many risk factors for human health have first been identified by clinical observations.”

According to Nilsson, the study — which examined the change in physical symptoms experienced by a 63-year-old man and a 62-year-old woman when a 5G cellular tower was installed on the top of their apartment building — “confirms the concerns raised for several years by hundreds of scientists and physicians about the dangers of the 5G rollout.”

As we do not wish to confuse readers, we have taken down the auto-translation of the study.
The case report is available at this link: "The Microwave Syndrome after Installation of 5G Emphasizes the Need for Protection from Radiofrequency Radiation"