Our Responsibility Towards Mother Earth and Mankind

REPOSTED, AS OUR CONTRIBUTION TO WORLD ENVIRONMENT DAY - 5 JUNE:

In 2001, I attended a talk given by Chief Arvol Looking Horse , 19th Generation Keeper of the Sacred White Buffalo Pipe of the Lakota, Dakota and Nakota Great Sioux Nation. During the talk, he said, “Many of you dreamed about the white buffalo in 1994.” The words stunned me, for I had had such a dream that year. I was standing on the edge of a very wide, deep pit, torn out of the earth by a huge machine. Looking into the distance, I saw a white buffalo on a hill. I took this to mean that we are desecrating the earth. The white buffalo appeared to us as a warning. The following from the “Native American” site tells the story of the white buffalo. The birth of one in 1994 had a very significant meaning for the native peoples. It signified “a time of profound change upon the planet and a new level of responsibility for mankind.”

This is my message for the New Year.  Each and every one of us has a responsibility to care for Mother Earth and humankind.

Chief Arvol Looking Horse reminds us of our responsibility towards the earth and mankind:

“Our relatives, the Animal Nations, reflect our own well-being. The buffalo, wolf, salmon, bear, caribou, eagle, whale, dolphin and many other sacred relatives in this fragile ecosystem are all in danger and are suffering. We, the Indigenous Nations, see what our brother Animal Nations are going through, since we are all connected, we are all One. What happens to them, happens to us!

“They need our help. Our voices must be heard!...

“This new millennium will usher in an age of harmony or it will bring the end of life as we know it. Starvation, war and toxic waste have been the hallmark of the Great Myth of Progress and Development that ruled the last millennium. To us, as caretakers of the heart of Mother Earth, falls the responsibility of turning back the powers of destruction. We have come to a time and place of great urgency. The fate of future generations rests in our hands.

“We must understand the two ways we are free to follow, as we choose – the positive way or the negative way…the spiritual way or the material way. It’s our own choice – each of ours and all of ours.

“You yourself are the one who must decide. You alone – and only you – can make this crucial choice. Whatever you decide is what you’ll be, to walk in honor or to dishonor your relatives. You can’t escape the consequences of your own decision. On your decision depends the fate of the entire World. We are the only species destroying Mother Earth!

“You must decide. You can’t avoid it. Each of us is put here in this time and this place to personally decide the future of humankind.

“My Grandmother once told me to understand that every person can have a good heart, a heart big enough to change the world! She said the Great Spirit wouldn’t give us something we couldn’t handle!

"According to Lakota [Sioux] lore, a long time ago, during a time of famine, a woman appeared, wearing white buffalo skin, and carrying a sacred pipe. She explained that the wooden stem was for the trees, and everything growing on earth, the red bowl symbolized the flesh and blood of all people, and the smoke was the breath of their prayers going to Wakan Tanka, the Creator. The woman showed the people the pipe ceremony, where offerings were made to the four directions, while drums were played, and sacred songs were sung. The people learned of the connection between the sky and the earth and the unity of all life. They learned that offering thanks to Wakan Tanka with the pipe would yield many blessings here on earth. Before leaving, the woman said that she would return when the time was ripe. Then she turned into a buffalo, changing colors several times. Finally, she changed into a white buffalo calf, and disappeared into the distance. The people followed her teachings and were hungry no more. 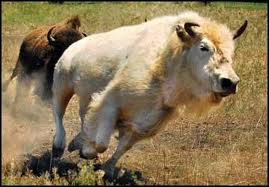 "In the summer of 1994, her promise of return was fulfilled with the birth of a white buffalo in Jamesville, Wisconsin. White buffalos are rare, but this one is unique because, as prophesied by the Native American Medicine community, the white buffalo has changed its colors since birth, going from white to black to red to yellow and back to white. Since each color represents one of the four directions--north being white, black representing west, red symbolizing south, and yellow depicting east--this buffalo has great symbolic significance to Native American tribes, who respond to it as a Christian would respond to the second coming of Christ. It signifies a time of profound change upon the planet and a new level of responsibility for mankind. One Native American visionary interpreted the birth of the white buffalo calf to mean that the four energies--the black, white, yellow, and red--will realize that there is only one race, the human race, and join together in peace."