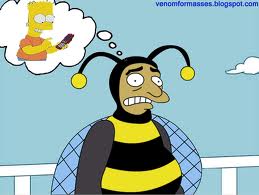 "If the decline of the bee population continues as it has, we may eventually end up with a global food crisis of unthinkable proportions. So far, the erection of cell towers has few restrictions. And the usage of cell phones continues to explode. What will it take for people to finally link cell phones and bees—and see the danger we all face?"  Have a look at this very short videoclip : after installation of a smart meter, a bee colony, which had existed for nearly 10 years in a nearby tree, disappeared.

I have never much liked bees. Probably because I’ve been stung by them in the past, and it’s always hurt like hell.

So when I began hearing about the decline of bee populations in the world, I found it kind of an interesting phenomenon to contemplate, along with all the other strange changes that seem to be happening in our natural world. But not something to really be concerned about.

Until someone pointed out the obvious to me: that bees are totally essential to the growing of food on this planet—that at least 75% of what we eat is dependent on bee pollination. That got my attention.

I began researching it and found that in the last decade, the honey bee population world-wide has taken a huge dive—billions of bees have died for unknown reasons. And what’s known as colony collapse disorder (CCD) has been happening at an unprecedented rate.

Unusually high rates of CCD were first noted in the US about ten years ago. Then reports from Europe began coming in. Soon it was from many different countries, with India now reporting with more and more urgency about its high occurrence, especially in certain Indian states.
Possible Theories

Scientists have pondered the different possible reasons for the decline of the bee populations: pests and predators, diseases, climate change, pesticides. Most concur that the current pests and predators of bees have been around for centuries; nothing new there. And diseases—same thing.

Climate change may have something to do with it, but they’re not clear exactly what. And pesticides—well, good news to some—the use of these has actually decreased in the last few years, presumably due to the rise of organic farming in many countries.

So where does this leave us? For an increasing number of scientists researching the decline of bee populations, it’s led to the possible link with the dramatic explosion of cell phone usage that has also happened in the last decade. And the thousands of cell towers that have been erected not only in our cities, but in outlying farmland and forests, as well.

The bees and cell phone theory caught on quickly, once posed. Partly because it was noted that the steepest declines in bee population had been reported in the US and Europe, where cell phone use has been greater than other parts of the world. And partly because, during this last decade, an overwhelming amount of research has surfaced pointing to the link between cell phone radiation and diseases such as cancer.

In general, the research in several different countries finds that the proximity to a hive of either a cell phone or a cell tower causes the hive to lose most of its worker bees–and in many cases, to collapse, sometimes within a surprisingly short period of time.

Different kinds of tests have been conducted. French biologists actually attached tiny microchips to the bees to track their daily behavior patterns in an effort to see what’s killing them. Researchers at both the Panjab University in Chandigarh, India, and at the Landau University in Switzerland fitted cell phones to the beehive and activated them intermittently to see what would happen. All have seen a direct link between the cell phones and the decline of the bee population.

What is it that actually happens to the bees when their hive is near a cell phone or cell tower? Sainuddereen Pattazhy, researcher and dean in the department of Zoology at SN College, Punahur, explains:

When the worker bees become disoriented and fail to find their way back to their hive, then the queen, the eggs, and the immature bees are left to die. No one seems to know exactly what ends up happening to all the disoriented worker bees.

Although he does add:

“Also the radiation causes damage to the nervous system of the bee and it becomes unable to fly.”

What’s interesting is they also find with the hives they’ve put near cell phones, that parasites, wildlife and other bees that normally raid the hive and pollen left behind when a colony dies, refuse to go anywhere near the abandoned hives.”

Daniel Favre, of the Swiss Federal Institute of Technology, a researcher who’s conducted over 83 experiments with cell phones and bees, has found that there is also a dramatic increase in noise or what is called “worker piping” when the phones are in use. This piping is always a signal to indicate disturbance in the hive and is a warning for the bees to leave the hive.  [The study by Daniel Favre was published in the review Apidologie in May 2011.]

If cell phones can have this kind of dramatic impact on a hive, then cell towers must create a much greater one. A graphic example can be found in anecdotal form with a columnist, Barbara Hughes, who was visiting a Benedictine abbey near the mission in San Luis Rey in CA. She writes:

“One of the monks who has been a bee keeper at the abbey for 40 years explained how, until numerous cell phone towers were constructed on the back of their property, he had been collecting 100 gallons of honey a week.

“But as the use of cell phones expanded, all of his bees died within a few weeks, until he discovered a small area near the base of a hill where he could not get service. Once he moved his hives to that particular area, the bees once again began to thrive and reproduce.”

What would happen if honey bees become extinct?

If the decline of the bee population continues as it has, we may eventually end up with a global food crisis of unthinkable proportions. So far, the erection of cell towers has few restrictions. And the usage of cell phones continues to explode. What will it take for people to finally link cell phones and bees—and see the danger we all face?