United States: ADHD Seen in 11% of Children as Diagnoses Rise 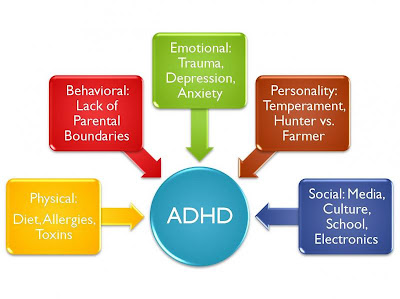 “Attention Deficit Hyperactivity Disorder (A.D.H.D.) has historically been estimated to affect 3 to 7 percent of children. The disorder has no definitive test and is determined only by speaking extensively with patients, parents and teachers, and ruling out other possible causes — a subjective process that is often skipped under time constraints and pressure from parents. It is considered a chronic condition that is often carried into adulthood.”

Few people consider environmental factors as a cause of ADHD – like exposure to the electromagnetic radiation from wireless technologies, which many young people use for long periods throughout the day, or certain food additives. Other factors implicated in the rising rates of ADHD are the aggressive marketing by pharmaceutical companies of drugs used to treat ADHD and parent and school pressure to improve a child’s performance or control his behavior. Drugs used to treat ADHD can lead to addiction, anxiety and occasionally psychosis.

A new study finds that children who use cell phones who are exposed to lead are at greater risk of developing ADHD that lead-exposed children who do not use cell phones much or at all.  Advice to parents:  Encourage your children to switch off their cell phones! (See "Children's Cell Phone Use May Increase Their Risk of ADHD".)

Nearly one in five high school age boys in the United States and 11 percent of school-age children over all have received a medical diagnosis of attention deficit hyperactivity disorder, according to new data from the federal Centers for Disease Control and Prevention.

These rates reflect a marked rise over the last decade and could fuel growing concern among many doctors that the A.D.H.D. diagnosis and its medication are overused in American children.

The figures showed that an estimated 6.4 million children ages 4 through 17 had received an A.D.H.D. diagnosis at some point in their lives, a 16 percent increase since 2007 and a 41 percent rise in the past decade. About two-thirds of those with a current diagnosis receive prescriptions for stimulants like Ritalin or Adderall, which can drastically improve the lives of those with A.D.H.D. but can also lead to addiction, anxiety and occasionally psychosis.

“Those are astronomical numbers. I’m floored,” said Dr. William Graf, a pediatric neurologist in New Haven and a professor at the Yale School of Medicine. He added, “Mild symptoms are being diagnosed so readily, which goes well beyond the disorder and beyond the zone of ambiguity to pure enhancement of children who are otherwise healthy.”

And even more teenagers are likely to be prescribed medication in the near future because the American Psychiatric Association plans to change the definition of A.D.H.D. to allow more people to receive the diagnosis and treatment. A.D.H.D. is described by most experts as resulting from abnormal chemical levels in the brain that impair a person’s impulse control and attention skills.

While some doctors and patient advocates have welcomed rising diagnosis rates as evidence that the disorder is being better recognized and accepted, others said the new rates suggest that millions of children may be taking medication merely to calm behavior or to do better in school. Pills that are shared with or sold to classmates — diversion long tolerated in college settings and gaining traction in high-achieving high schools — are particularly dangerous, doctors say, because of their health risks when abused.

The findings were part of a broader C.D.C. study of children’s health issues, taken from February 2011 to June 2012. The agency interviewed more than 76,000 parents nationwide by both cellphone and landline and is currently compiling its reports. The New York Times obtained the raw data from the agency and compiled the results.

A.D.H.D. has historically been estimated to affect 3 to 7 percent of children. The disorder has no definitive test and is determined only by speaking extensively with patients, parents and teachers, and ruling out other possible causes — a subjective process that is often skipped under time constraints and pressure from parents. It is considered a chronic condition that is often carried into adulthood.

The C.D.C. director, Dr. Thomas R. Frieden, likened the rising rates of stimulant prescriptions among children to the overuse of pain medications and antibiotics in adults.

“We need to ensure balance,” Dr. Frieden said. “The right medications for A.D.H.D., given to the right people, can make a huge difference. Unfortunately, misuse appears to be growing at an alarming rate.”

Experts cited several factors in the rising rates. Some doctors are hastily viewing any complaints of inattention as full-blown A.D.H.D., they said, while pharmaceutical advertising emphasizes how medication can substantially improve a child’s life. Moreover, they said, some parents are pressuring doctors to help with their children’s troublesome behavior and slipping grades.

“There’s a tremendous push where if the kid’s behavior is thought to be quote-unquote abnormal — if they’re not sitting quietly at their desk — that’s pathological, instead of just childhood,” said Dr. Jerome Groopman, a professor of medicine at Harvard Medical School and the author of “How Doctors Think.”

Rates by state are less precise but vary widely. Southern states, like Arkansas, Kentucky, Louisiana, South Carolina and Tennessee, showed about 23 percent of school-age boys receiving an A.D.H.D. diagnosis. The rates in Colorado and Nevada were less than 10 percent.

The medications — primarily Adderall, Ritalin, Concerta and Vyvanse — often afford those with severe A.D.H.D. the concentration and impulse control to lead relatively normal lives. Because the pills can vastly improve focus and drive among those with perhaps only traces of the disorder, an A.D.H.D. diagnosis has become a popular shortcut to better grades, some experts said, with many students unaware of or disregarding the medication’s health risks.

“There’s no way that one in five high-school boys has A.D.H.D.,” said James Swanson, a professor of psychiatry at Florida International University and one of the primary A.D.H.D. researchers in the last 20 years. “If we start treating children who do not have the disorder with stimulants, a certain percentage are going to have problems that are predictable — some of them are going to end up with abuse and dependence. And with all those pills around, how much of that actually goes to friends? Some studies have said it’s about 30 percent.”

An A.D.H.D. diagnosis often results in a family’s paying for a child’s repeated visits to doctors for assessments or prescription renewals. Taxpayers assume this cost for children covered by Medicaid, who, according to the C.D.C. data, have among the highest rates of A.D.H.D. diagnoses: 14 percent for school-age children, about one-third higher than the rest of the population.

Several doctors mentioned that advertising from the pharmaceutical industry that played off parents’ fears — showing children struggling in school or left without friends — encouraged parents and doctors to call even minor symptoms A.D.H.D. and try stimulant treatment. For example, a pamphlet for Vyvanse from its manufacturer, Shire, shows a parent looking at her son and saying, “I want to do all I can to help him succeed.”

Sales of stimulants to treat A.D.H.D. have more than doubled to $9 billion in 2012 from $4 billion in 2007, according to the health care information company IMS Health.

Criteria for the proper diagnosis of A.D.H.D., to be released next month in the fifth edition of the Diagnostic and Statistical Manual of Mental Disorders, have been changed specifically to allow more adolescents and adults to qualify for a diagnosis, according to several people involved in the discussions.

The final wording has not been released, but most proposed changes would lead to higher rates of diagnosis: the requirement that symptoms appeared before age 12 rather than 7; illustrations, like repeatedly losing one’s cellphone or losing focus during paperwork, that emphasize that A.D.H.D. is not just a young child’s disorder; and the requirement that symptoms merely “impact” daily activities, rather than cause “impairment.”

An analysis of the proposed changes published in January by the Journal of Learning Disabilities concluded: “These wording changes newly diagnose individuals who display symptoms of A.D.H.D. but continue to function acceptably in their daily lives."Given that severe A.D.H.D. that goes untreated has been shown to increase a child’s risk for academic failure and substance abuse, doctors have historically focused on raising awareness of the disorder and reducing fears surrounding stimulant medication.

A leading voice has been Dr. Ned Hallowell, a child psychiatrist and author of best-selling books on the disorder. But in a recent interview, Dr. Hallowell said that the new C.D.C. data, combined with recent news reports of young people abusing stimulants, left him assessing his role.

Whereas Dr. Hallowell for years would reassure skeptical parents by telling them that Adderall and other stimulants were “safer than aspirin,” he said last week, “I regret the analogy” and he “won’t be saying that again.” And while he still thinks that many children with A.D.H.D. continue to go unrecognized and untreated, he said the high rates demonstrate how the diagnosis is being handed out too freely.

“I think now’s the time to call attention to the dangers that can be associated with making the diagnosis in a slipshod fashion,” he said. “That we have kids out there getting these drugs to use them as mental steroids — that’s dangerous, and I hate to think I have a hand in creating that problem.”

This article has been revised to reflect the following corrections:
Correction: April 1, 2013
An earlier version of the headline with this article referred incorrectly to the rate of A.D.H.D. diagnosis in boys in the United States. Nearly one in five high school age boys have been diagnosed, not boys of all ages.

Correction: April 2, 2013
A headline on Monday about the marked rise in diagnoses of attention deficit hyperactivity disorder, according to new data from the Centers for Disease Control and Prevention, described incorrectly the disorder that saw the increase. It is A.D.H.D. — not hyperactivity, which is present in only a portion of A.D.H.D. cases. The article also misidentified the organization that plans to change the definition of A.D.H.D. to allow more people to receive the diagnosis and treatment. It is the American Psychiatric Association, not the American Psychological Association.

Correction: April 3, 2013
An article on Monday about the marked rise in diagnoses of attention deficit hyperactivity disorder misstated the increase in the past decade of children ages 4 through 17 diagnosed with A.D.H.D. at some point in their lives. It is 41 percent, not 53 percent.