"Proceedings of the Scientific and Citizen Forum on Radioprotection: from Chernobyl to Fukushima" (Geneva, 12-13 May 2013) Now Available Online 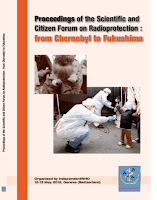 Proceedings of IW “Scientific and Citizen Forum on Radioprotection – Now on line
Independent WHO, 22 June 2013

We are pleased to announce the online publication of the English-language version of the “Proceedings of the Scientific and Citizen Forum on Radioprotection: from Chernobyl to Fukushima,” a conference which was organized on 12 and 13 May 2012 in Geneva by the Collective IndependentWHO – Health and Nuclear Energy. A printed version of the Proceedings will be available in mid-July.

The Forum brought together independent scientists and citizens from Belarus, Russia, France, Belgium, the United Kingdom, Switzerland and Japan, as well as politicians and journalists. As participants demonstrated, the scandal of the omerta on the effects of radiation on health continues, more than two years after the beginning of the Fukushima disaster on 11 March 2011. There are more and more sick people in the affected areas, including children. Citizens, Japanese doctors and independent scientists are obliged to organize in the face of the shortcomings of the authorities and international organizations, including the World Health Organization (WHO), which is still subject to the agreement that it signed with the International Atomic Energy Agency (IAEA) on 28 May 1959.

With the publication of the “Proceedings” we remind all those concerned about the risks of atomic radiation, whether from civilian or military use. There is no minimum acceptable radiation dose for health, contrary to what is claimed by the Japanese authorities and international organizations following the accident at the Fukushima Dai-Ichi nuclear power plant.

This 160-page report, profusely illustrated with graphics and photos, is an accurate and complete reflection of the presentations and discussions at the Forum. A French-language version was published earlier this year. It is now available in English as a PDF on our website. The print version will be available at mid-July 2013.

If you wish to purchase a print copy please send us an e-mail on
http://independentwho.org/en/contact-independentwho/
and will reply with price and payment instructions.