[Note by Blog Editor:  We have no idea why this petition is not gathering more signatures.  More than 1,900 persons have visited this post on the English blog, and 1,500 persons on the French blog!] 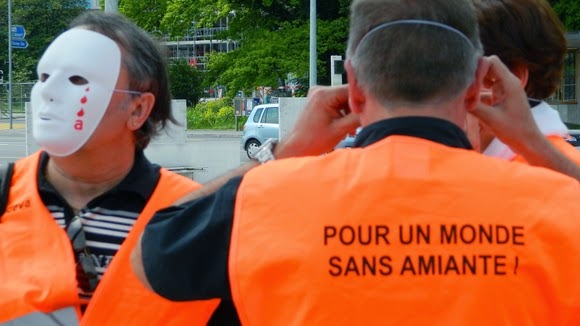 to bring Stephan Schmidheiny, the person directing the Eternit asbestos fiber-cement factories in many countries of the world, before the International Criminal Court in the Hague for "crimes against humanity". Although condemned to 18 years in prison by a court in Turin and a fine of 100 million Swiss francs, Schmidheiny was recently acquitted by the Court of Cassation in Rome.

François Iselin, spokesperson for CAOVA, an asbestos victims' group based in Lausanne, Switzerland, has asked me personally to support this petition. My interest in this issue is very personal. My companion, Adon, died of mesothelioma from exposure to asbestos. I have experienced first-hand the terrible suffering of people who have asbestos-related diseases.

During the recent 10th anniversary Paris Appeal symposium, organized by Professsor Dominique Belpomme, President of ARTAC (Association for Research  on Treatment Against Cancer) and ECERI (European Cancer and Environment Research Institute), he and scientists, researchers, and legal experts, including Marie-Odile Bertella-Geffroy (the French judge in charge of the asbestos affair), discussed bringing polluters before the International Criminal Court for “crimes against humanity”.

We are aiming for 50,000 signatures, but to date have only 3,500.  Anyone in the world may sign. Asbestos continues to be used widely in the world, polluting the environment and affecting people's health.  According to the World Health Organization, about 125 million people in the world are exposed to asbestos at the workplace and more than 107,000 deaths each year are attributable to occupational exposure to asbestos.  This does not include the many other persons who are exposed:  the family members who breathed in the dust carried on workers' clothing and those living in environments close to asbestos-related factories.  I personally know of a 55-year-old man who recently died from mesothelioma.  As a child, he had breathed in the dust from his father's clothes.  His mother was also recently diagnosed with the same disease.

The petition was launched by Massimiliano Francia, journalist at "Il Monferrato", a newspaper covering Casale, Italy, and the surrounding area where 3,000 persons died. "Since 1989, when I started working at the newspaper, I followed the asbestos story continuously… I never thought that the painful list of names of the victims (two hours and 58 minutes) in the sentence read by Judge Giuseppe Casalbore (almost a tribute) could become detached in that pronounced by the Court of Cassation in Rome, which - in about twenty seconds - has canceled the trial and the thousands of victims of Eternit. 'In the name of the Italian people,' said the judges. History will do justice to this shame."

Thank you to all of you for your support.

You may read more about the issue here:  Eternit Factory at Casale Monferrato.

Note:  This petition was removed from my Facebook page and it seems that I cannot re-post it into the public nor even friends' domain.
Publié par Meris à l'adresse 12:12 PM

Email ThisBlogThis!Share to TwitterShare to FacebookShare to Pinterest
Libellés : Asbestos