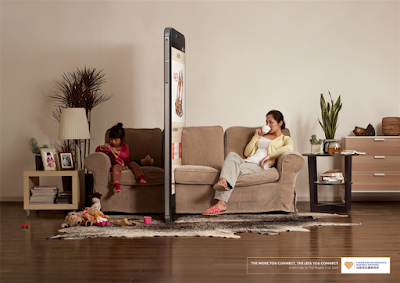 Powerful Ads Show What Your Child Sees When You're Addicted To Your Phone
by Caroline Bologna, Associate Editor, The Huffington Post,
10 July 2015

Titled "Phone Wall," the campaign by Ogilvy & Mather China is a literal representation of the barriers to human relationships that screen addiction creates.

"Pulling out a phone during a conversation is like erecting a brick wall between two people," Juggi Ramakrishnan, Executive Creative Director (ECD) of Ogilvy & Mather Shanghai, told The Huffington Post. "We want people to see this and rethink their relationships with others and their phone in a different light."

The campaign is for the Center for Psychological Research, Shenyang, a government body focused on raising awareness around social issues and causes. Ramakrishnan says screen addiction is a growing issue in China. "This is a definite pressure point that Chinese society is facing on its path of rapid development," he said, noting that smartphones and social media seem to permeate "all aspects of everyday life" -- from shopping to business to social interactions.

This pervasiveness has the potential to be especially detrimental to families with kids, says Ramakrishnan."There is an alarming trend of parents ignoring their children of all ages, paying more attention to their phones and tablets than their immediate surroundings."

Consequently, children may feel they aren't getting the attention they need. "Children who need their parents’ responsiveness when they are angry, sad, frustrated or excited, now find they must compete for it," he continued. "It’s almost like dealing with sibling rivalry. Except that the rival is a new electronic device. This trend, if unchecked, can lead to psychological problems."

Ramakrishnan also noted that addiction to mobile devices can put a strain on romantic relationships as well, as partners may become less responsive to each other's feelings and have fewer meaningful interactions.

Ultimately, this campaign is meant to spark conversations about smartphone addiction. "The objective is to get adults to rethink their relationship with screens," the ECD said. "And to get them to put down their devices when they are with other people; be it their children, their friends or their partners."

"The people in our lives should get priority over devices."