Switzerland: Cell Phone Radiation - How Big is the Risk? 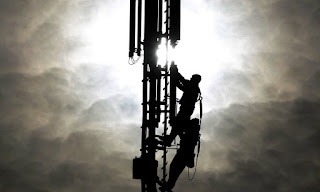 [Note from the Editor of this blog:  Following is a near-verbatim summary of the article.  This does not represent the full text.  We wanted readers to have an idea of the current thinking in Switzerland regarding the risks of cell phone radiation from the point of view of the authorities, scientists, and one "mobile-critical" association, Gigaherz.ch .  As far as we know, the magazine "Beobachter" is the only mainstream Swiss media that has mentioned the International EMF Scientist Appeal, which was signed by one Swiss, for his studies on the effect of cell phone radiation on bees.]

Veterinarian Michael Hässig presented an experiment at the University of Zurich as a situation that we find every day. He exposed ten cows to radiation of the type emitted by mobile antennas.  He then examined three enzymes in the blood of animals and noted that the behavior of the enzymes had changed. In some cows, the activity had increased, in others, it lessened. A third group showed no reaction. The experiment brought two important insights: cell phone radiation can alter the activity of proteins. And each organism reacts individually in spite of identical experimental conditions.  It is still too early for definitive statements. "We need more research. In principle, however, the results could be applied to humans"...

Recently, there has been increasing evidence that daily exposure to non-ionizing electromagnetic waves, such as that emitted by mobile phones, mobile phone base stations, wireless networks or general electrical equipment and wiring, is not as harmless as many people think. In the spring, around 200 scientists from 39 countries, based on the latest research findings, launched an international appeal to the UN Secretary-General Ban Ki-moon:  People must be better protected from the effects of radiation.

Associations which are critical of wireless technology call the global expansion of the mobile network the greatest experiment on living human beings that has ever taken place.

Use of mobile technology is increasing rapidly. In Switzerland, the number of registered mobile phones - 4.6 million in 2000 - more than doubled to 10.6 million by 2012. The number of connections rose from 2.6 to 5.9 billion, the average duration of calls, from 1.59 to 2.23 minutes. In 2000, there were 3,100 antenna sites, in 2012 - 10,500. And the expansion continues. In order to satisfy the high demand for transmission capacity, the federal government is planning to increase the number antennas or the limit values for transmission of power.

Swisscom spokesman Josef Huber refers to a document of the World Health Organization (WHO) in 2006:  there is no "convincing scientific evidence that weak RF signals from base stations and wireless networks are adversely affecting human health".

The WHO assessment is inadequate. In 2011, WHO classified cell phone radiation as "possibly carcinogenic". This category includes high-voltage lines and gasoline, as well as coffee. Next, Huber cited a report by the Federal Office for the Environment (FOEN).  Cell phone radiation to which we are exposed is referred to therein as "generally satisfactorily low". So far, health effects have not been scientifically proven. "Adaptation of the emission limits in the regulations on the protection against non-ionizing radiation is not necessary."

The Swisscom media spokesman quoted correctly, but selectively. The same report also notes that the studies on which this assessment is based, in part had serious weaknesses. In addition, long-term studies on the effects on sleep and well-being are currently lacking. The conclusion of the FOEN report: "With this fragmentary data, the lack of evidence of health risks does not automatically mean that there is no impact. From a scientific perspective, therefore, the prevention-oriented approach in dealing with non-ionizing radiation is still indicated. "

"The whole thing is one big sham"

In Switzerland, the limit values applying to places where people are staying for a long time are ten times lower than the limits for maximum permissible transmission of power for protection against non-ionizing radiation set out in the recommendations of the International Commission on Non-Ionizing  Radiation Protection (ICNIRP).  Thus, the Federal Council is taking into account the precautionary principle. It states that agents that might be harmful have to be limited at an early stage, even if scientific evidence of harm is still missing.

That sounds reassuring. But not for Hans-Ulrich Jakob: "The whole thing is one big sham," the president of the mobile-critical association Gigaherz.ch says. The difference only came about because radiation was measured at various locations:  in Switzerland, in the living room and bedroom, at ICNIRP, on the roof...

The limits apply only for fixed installations. For mobile phones, wireless routers or other mobile sources of non-ionizing radiation, there are no legal limits. Manufacturers depend mostly on the recommendations of ICNIRP which take into account only the thermal effect of the radiation. This so-called SAR value measures how much heating of the tissue there is, such as when calling on a mobile phone. All devices are below the ICNIRP limits.

Mobile critics doubt the validity of these limits. "The assumptions for the thermally-based action model are scientifically out of date," says Peter Kälin, president of the Swiss branch of Doctors for Environmental Protection...

Not only the energy, but also the signal patterns play a role. "That needs to be changed and threshholds adapted urgently.  Many studies show biological effects at low doses, which no longer can be explained with the SAR model," says Peter Kälin...

The best example of effects at low doses is Hässig's experiment on cows. But how is the effect to be explained?  "I'm always fighting with physicists," says Hässig. "It is true that a lot is a lot, little does little. But biology does not work that way. In small doses, the linear relationship between radiation intensity and degree of damage to health no longer applies.

Resonance as an explanation?

For the veterinarian, a possible explanation lies in the phenomenon of resonance. It sounds more complicated than it is. The YouTube video of the Tacoma Narrows suspension bridge in the U.S. state of Washington shows what causes resonance. A wind of 68 km / h was enough to cause the bridge to collapse, as it began to vibrate in resonance frequency. If systems are stimulated in this way, a vibration can very easily cause rocking. A minimal amount of energy is sufficient to achieve maximum effect.

The same could also play out  in the cell, when cell phone radiation stimulates the vibrations in the natural frequency range of those enzymes which are responsible for approximately doubling the genetic material during cell division. Hässig says "This enzyme spins out the production of genetic material at 30,000 revolutions per second. Even the slightest error can cause errors and may cause cancer."

Hässig published in a peer-reviewed scientific journal. But his results were criticized. Gregor Dürrenberger, Director of the Research Foundation for Electricity and Mobile Communication (FSM), has doubts about the results. The assessment of the measurements of the amount of radiation to which the individual cows were exposed was not robust enough. "If the same test conditions had been applied in a human study to test the effectiveness of a drug, the results would almost certainly be inconclusive, at best, an interesting exploratory assessment," he wrote in a commentary.

Mobile critics should not be surprised by that assessment. The Foundation is funded by the providers. Swisscom will pay 300,000 francs, Sunrise and Salt each, 100,000 francs...

Another study recently alluded to by mobile critics created a furore. It examined the impact of mobile phone radiation on tumor growth in mice, with waves used in the lower area of ​​the ICNIRP limits.

Result: In the irradiated mice, the tumors grew more rapidly than in the non-irradiated.  This result alone would be remarkable. Even more surprising, however, the research team found no clear relationship between radiation intensity and tumor growth. At low wave intensity some tumors grew faster than at higher intensity. "That surprised us. At present, we can only speculate what the reasons are for this finding," says investigator Alexander Lerchl of Jacobs University in Bremen.

Swiss researchers have given the study good grades. "I consider the Lerchl study important. Colleagues appreciate the quality of the study. The findings must be taken seriously," says Martin Röösli, Head of Environment and Health of the Swiss Tropical and Public Health Institute. Daniel Dauwalder, spokesman for the Federal Office of Public Health: "The study shows that radiofrequency electromagnetic fields, based on or below the present health limits, at least in mice, could have cancer-promoting effects." However, it is unclear how the results would be applied to humans.

Lerchl has shown biological effects of cell phone radiation within the limits established, which are clearly more serious than assumed. Previous studies had shown that the radiation in humans can affect brain waves and sleep phases. In laboratory experiments, behavioral changes in animals or physiological changes in cell cultures were observed. Investigations in the area of ​​radio and TV stations showed higher leukemia and lymphoma rates than expected. According to FOEN, however, the relevant studies have methodological flaws. In addition, the results were not uniform. ..

[At the end of the article, links to sites for additional information are cited.  One of them is the IGE interest group for electric biology and related subjects:  http://www.spini.ch/