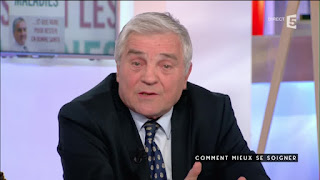 We have had a request for a transcript of the interview with Professor Dominique Belpomme during the French TV program, "C à vous" which aired on 6 April 2016 on the theme "Taking better care of ourselves".  The entire program is not available to us in Switzerland, however, we have access to a 10-minute segment which includes the interview with Prof. Belpomme. (View segment in French.)  Following is a summary of this segment by the Editor of "Towards Better Health".

Anne Sophie Lapix, presenter of the program, refers to Prof. Belpomme's newest book, "Comment naissent les maladies" [how do diseases arise?] where he says 70-90% of cancers are linked to the environment.


Prof. Belpomme replies that especially now, there is molecular proof.   He refers to "epigenetics": the study of changes in organisms caused by modification of gene expression. Radiation, chemical substances, microbes modify proteins in the cell and gene expression which explains why cancers in particular are linked to the environment.

ASL: ... a recent WHO report says 10% of cancers are due to atmospheric pollution.

DB:  There is also pollution in our plates - pesticides in small doses. Hundreds of scientific articles published in international journals say there is a causal link between these small doses and cancers.

ASL:  You say that the considerable increase in cancer over the past years is not just due to living longer or because we more easily diagnose cancer cases.

DB:  Cancer is occurring in children and young adults. The awareness of the medical corps of this is rather recent. It is the same for Alzheimer's - it's not a disease of aging. We know the it is electromagnetic fields, mercury that is very toxic, destroying neurons especially implicated in Alzheimer's disease, and certain pesticides.  These all contribute to Alzheimer's. It is the same for autism. Its explosion is an "insult to life". In Europe and the United States, one in 60 children is born autistic. We find exactly the same causes as in Alzheimer's. The only thing is that it is during pregnancy that this occurs.

ASL:  What is the most dangerous pollution?

DB:  Pesticides which cause not just cancer but also diabetes, Alzheimer's, autism. The other pollution is electromagnetic fields, not just very low frequency but also radiofrequencies and high frequencies.

ASL:  You say cell phones should not be used by those under age 20 - only for just a few minutes.

ASL:  Has this been demonstrated?

DB:  No!  There is confusion regarding public opinion, created by the operators and policy-makers for economic and financial reasons.

My team just published a 20-page article in a prestigious American revue ["Reliable disease biomarkers characterizing and identifying electrohypersensitivity and multiple chemical sensitivity as two etiopathogenic aspects of a unique pathological disorder"].  It is clear today that electrohypersensitivity is a real illness.  I have seen in consultation 1,500 cases over the last four years.

ASL:  You should even ban baby phones.

DB:  You have cognitive disorders in children. An American study says 10% of children less than age 16 is suffering a decrease in IQ. We've never seen so much autism in schools. It's a real problem. Our policy-makers don't take this into account when wanting to reform schools. We have cordless phones, computers connected to Wi-Fi, and game consoles at home. All this adds to electrosmog.

ASL:  Is the diffusion of Wi-Fi criminal?

DB:  It is "absolutely unacceptable" especially in public places such as nurseries, schools, and universities.

[Prof. Belpomme then refers to the advice he gives individuals in his book, especially important for children and pregnant women, including protecting oneself in one's workplace, paying attention to what one eats, one's choice of clothes and cosmetics, protecting oneself from exposure to radioactivity and electromagnetic waves.]

DB:  Environmental prevention is being promoted by health systems, for example, in the United States. We are very much behind in France. It has been scientifically shown that living within 600 meters of a high power transmission line places children at risk for leukemia. We have a huge work to do in France in adopting norms for electromagnetic fields where they are 40 V/m. In Switzerland they are "3 V/m". There are pesticides in our plates, too many medications on the market...
Publié par Meris à l'adresse 2:18 PM