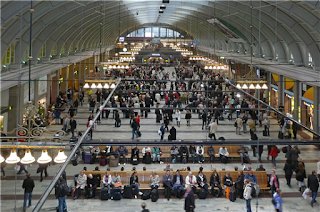 "The wireless antenna signals bombarding Stockholm Central are the same as those which befoul public buildings, sports arenas, schools, medical centers, cities, towns and neighborhoods of the USA."

Antenna Sickness Is Everywhere Now
(Clicking on the title will bring you to an excellent site on the health risks of mobile technology.)

Mobile communications and mobile entertainment require a human environment overflowing with disease-inducing radiation, both indoors and out. Above is a photo of the Stockholm Central Railway Station in Sweden. A 2016 study of the man-made wave pollution within this facility was conducted by the Hardell Cancer Research Group in Sweden. [4] This study is a reality check on the astronomical number of RF/microwave frequencies and modulations which simultaneously bombard our bodies everywhere we go.

Twenty different pulsed frequency sets were found within this cavernous facility. Investigators used professional RF analyzers to identify FM radio at 87 megahertz and three different police radio bands (TETRA) propagating at 380 to 470 megahertz. The 4G/LTE signals range from 791 megahertz to 2.7 gigahertz. GSM signals span 880 megahertz to 1.8 gigahertz. Wi-Fi signals range from 2.45 gigahertz to 5.9 gigahertz. UMTS/3G frequencies span 1.9 gigahertz to 2.2 gigahertz. There is also WiMAX at 3.3-3.9 gigahertz. This pollution is measured as high-frequency electromagnetic voltage, which literally charges the air with powerful electron activity. Ions and molecules are greatly affected. This pollution oscillates the polarity of human cells (negative-positive) millions to billions of times per second, a situation that does not occur in nature. This pollution is the voltage of cancer.


The wave carcinogen in Stockholm Central is delivered through numerous frequency channels for both uplink (radiation from mobile devices) and downlink (radiation from fixed antennas). Each of these biologically-active frequencies slams living flesh with its own peculiar modulation pulses. A human body in this environment becomes a breathing antenna for a multitude of strange electromagnetic vibrations that are alien to all natural biological rhythms. These electromagnetic manipulations are widely-documented to rearrange human genetic material. As with the United States and Western Europe, Swedish cancer rates continue to rise exponentially. Young Swedish women, especially, are now suffering a striking increase in the variety of thyroid cancer linked to radiation exposure. [5]

The oncologists who completed the Stockholm study represent four Swedish medical institutions. These researchers include in their report the latest scientific evidence of sickness and cancers associated with the wireless radiation measured at Stockholm Central. They confirm that many negative biological consequences, for both people and animals, are induced by far lower power density levels than those found within the complex. They stress the urgency of officially designating the invasive wireless radiation in Stockholm Central as a CONFIRMED HUMAN CARCINOGEN, thereby recognizing this pollution on par with asbestos and nuclear radiation. And they warn that "it is imperative to measure the public's exposure" in order to accommodate future epidemiological studies of the wireless carnage we all suffer today.

The late Robert C. Kane, Ph.D., whose career included electrical engineering for Motorola, advised: "The belief that microwaves cannot cause bond breaking in chromosomes or DNA, or damage tissue more generally is quite inaccurate. Since the energy absorption mechanism is not the same as that for ionizing radiation, such as X-rays, the mechanisms of energy transfer that cause the bond breaking may be different. However the result is quite evident--DNA and chromosomal damage…. It’s not just happening at one frequency and it’s not just being observed by researchers in one laboratory. The same chromosome and DNA damages are being reported at frequencies across the entire range, including 100 MHz [FM radio], 300 MHz, 837 MHz, 954 MHz [cell phones] 1,250 MHz, 2,450 MHz [2.45 gigahertz: Wi-Fi, Bluetooth, smart phones], and up to 9000 MHz [9 gigahertz: vehicle-to-vehicle radar systems]." [6]

The wireless antenna signals bombarding Stockholm Central are the same as those which befoul public buildings, sports arenas, schools, medical centers, cities, towns and neighborhoods of the USA. A foremost European expert in radio engineering confirms the incredible complexity of this ubiquitous electrosmog: "There are now about 20 modulation systems in widespread common use, plus about 50 or more specialist ones." Regarding the manipulation of radio signals to increase data speed and accommodate millions of eager Wi-users, he says: "Phase modulation is a relatively new technique...that allows far more data to be encoded onto an RF carrier (microwave signal)....Instead of a nice smooth sine wave, the RF carrier repeatedly jumps from one part of the sine wave to a different part as it encodes the data. This produces a lot of VERY fast, sharp "edges" and a lot of "aggressive" low frequency noise (10-HZ to 100 kilohertz) or even faster." [7]