Japan: Medical Associations Warn Against Children's Excessive Use of Smartphones 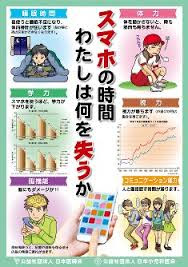 A poster released by the Japan Pediatric Association and Japan Medical Association warning of the dangers of excessive smartphone use. The risks are (clockwise from top left): insufficient sleep, lack of excercise resulting in weaker bones and muscle, worsening vision, loss of communication skills, worsening cognitive function, and declining academic ability.

The Japan Pediatric Association and the Japan Medical Association on Feb. 15 unveiled a poster warning against the dangers of the excessive use of smartphones.

The poster will be sent to approximately 170,000 members of the two associations to be put up at clinics nationwide.

The poster poses the question, "What do I sacrifice with time spent on my smartphone?" and responds with the six categories of sleep, academic performance, brain function, physical strength, vision, and communication ability. The effects of smartphone use in these areas are explained using data from the Ministry of Education, Culture, Sports, Science and Technology (MEXT) and illustrations.

According to a National Survey on Scholastic Aptitude and Learning Environment conducted in the 2014 academic year, students in both elementary and junior high schools were found to have a tendency toward lower scores the longer they spent on their phones.

The Japan Pediatric Association had already compiled recommendations in 2004 that time spent watching television, playing mobile phone games, or otherwise using cell phones be limited to a maximum of two hours per day, and that children up to 2 years of age refrain from watching television or videos. The association is calling for smartphone use to be limited accordingly.