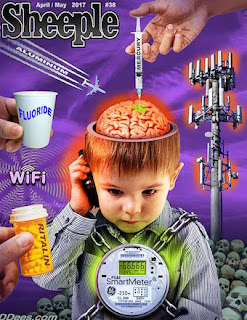 Ecstatic remarks by FCC Commissioner Mike O’Rielly on the first “World Wi-Fi Day” June 20 have caused a bout of head shaking and alarm in the Wi-Fi health community.

O’Rielly pulled out all the stops in singing the praises of the observance, saying it “acknowledges the wonderful technology” that has been developed.

He sees a world literally bathed in wireless transmission of information.

“It’s more than likely than not that internet traffic will continue to shift to Wi-Fi for the foreseeable future and security enhancements will reverse threats of exposed consumer experiences,” he said.

“Moreover, ubiquitous Wi-Fi voice calling and a truly mesh network seem not far away. Wi-Fi incorporation into location technologies seems a guarantee especially for hard to reach areas such as building interiors,” he added.

Without Wi-Fi, “Users would still be dragging fiber throughout the inner workings of commercial buildings, residences and campuses, dramatically raising service costs while reducing availability,” he continued.

Especially at risk are children, as is shown in this graphic.

“The FCC knows this,” she said, “yet continues to fail to invoke the precautionary principle, placing corporate profit over public health.”

She cites Harvard's “Captured Agency Report” and notes the U.S. Government Accountability Office asked the FCC to bring its public radiation exposure guidelines in line with current science in 2013.

“They have yet to do so,” she continued, “even when in 2016 the U.S. National Toxicology Program reported wireless radiation causes DNA damage, brain and heart tumors. It's important that we all become educated on this, and compel industry to make biologically safe mobile technology. (https://sites.google.com/site/understandingemfs/manufacturers)

She cites advice from wirelesseducation.org saying that government guidelines on wireless “do not reflect current science” with the result that manufacturers “are allowed to sell products that emit toxic levels of microwave radiation.”

“A little education can go a long way toward protecting yourself and your loved ones,” says the site.

The product information pamphlets that come with wireless devices contain a passage about Exposure to Radio Frequency Energy, says Doucette. But some companies, she notes, have taken the passage out of the hard-copy materials, and imbedded it deeply within the device settings, usually under the Legal heading, where consumers are unlikely to see it.

Showthefineprint.org has compiled these passages so you can easily see what your device warns, she adds.

Although companies say they comply with FCC regulations, science has proven the regulations are hundreds to thousands of times too high to prevent the damage being done at the non-thermal level by mobile devices.