Re-POSTED: 11 JULY 2018:  These types of smart objects should be withdrawn from the market. Not only do they negatively affect a child's behavior, but also they are assaulting these kids's bodies with a 2B "possibly carcinogenic" substance, microwave radiation. 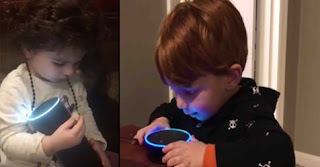 (Washington)—Wireless virtual assistants expose children to untested levels of microwave radiofrequency radiation- the same radiation emitted by cell phones. Before coming on the market, radiation exposures for virtual assistants are compliance tested with an 8 inch separation between the device and a large adult male body phantom. Radiation levels are not tested at body contact. Health organizations are issuing an alert that children who sing and play close to these devices are exposed to radiofrequency microwave radiation levels that could greatly exceed these tested government radiation limits.


“If a person or child is closer than 8 inches to the virtual assistant, they are absorbing levels of this radiation that greatly exceed government guidelines,” stated Devra Davis PhD, MPH, President of Environmental Health Trust (EHT), a scientific non-profit issuing a worldwide alert to inform the public to reduce virtual assistant exposures to microwave radiation —the same type of radiation emitted by cell phones. Davis pointed to studies from the acclaimed U.S. National Toxicology Program indicating chronic exposure to cell phone radiation increased the risk of malignant brain cancer, DNA damage, and studies that have found exposure affects heart and brain development.

Manufacturers of virtual assistants state in the online safety manuals that the user maintain at least a 20 cm distance between the device and the body.

For example, the Amazon Echo states:

…This device should be installed and operated with a minimum distance of 20cm between the radiator and your body. The remote control meets the RF exposure requirement of low power devices under portable operation. Nevertheless, it is advised to use the Products in such a manner that minimizes the potential for human contact during normal operation.”

“To satisfy FCC exposure requirements, a separation distance of at least 20 cm should be maintained between the antenna of this device and persons during device operation. Operations at closer than this distance are not recommended.”

“Children love gathering around these devices completely unaware that it is exposing them to radiofrequency radiation. Most children will be hovering over the device placing their head much closer than the 20 cm (about 8 inch) distance stated in the manual,” stated Theodora Scarato MSW, Executive Director of EHT, who added, “parents have a right to know about these radiation exposures and they have a right to know that close proximity to these devices poses risks to their child’s health and safety.”

“What are the radiation exposures for virtual assistants at 5 inches away, the typical distance a child will be from this device? Manufacturers only test them at 8 inches distance,“ stated French physician Dr. Marc Arazi, who is credited with blowing the whistle on what has been dubbed a “Phonegate” forcing the government of France to release hundreds of cell phones’ radiation tests that document most phones tested at body contact exceed government limits. “Just like cell phones, manufacturers do not test these virtual assistants close to the body. If cell phones are exceeding radiation limits, then what about all of these other devices? It is an international scandal that cell phones and wireless devices are not tested for compliance at body contact.”

The California Department of Health recently made national headlines when it published advice on how to reduce exposure to radiofrequency radiation from cell phones citing research links to cancer, memory problems, headaches and sperm damage. The American Academy of Pediatrics has long recommended children reduce exposure to cell phones because children “are more vulnerable” and issued ten steps to reduce cell phone radiation in 2016 after the National Toxicology Program released research findings linking cell phones to brain cancer and DNA damage.