"Even a small rise in very rare cancers from cell phone radiation would constitute a serious public health concern due to the fact that billions of people are using cell phones." 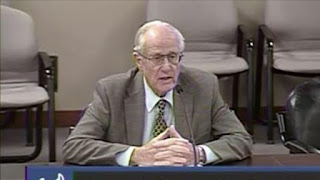 Anthony B. Miller MD, a longtime advisor to the World Health Organization and senior advisor to Environmental Health Trust (EHT) has issued a statement that the recently released findings from the $25 million NIH/NIEHS National Toxicology Program (NTP) cell phone radiofrequency radiation carcinogenicity studies combined with human epidemiology studies “conclusively confirms that radiofrequency radiation is a category 1 human carcinogen.” EHT is a scientific think tank focused on preventable environmental health risks and will be publishing a series of expert reactions to the NTP technical reports this week.

“In the NTP rat study there was a significant increase in incidence of schwannomas of the heart in the animals exposed to radiofrequency radiation, with a dose-response relationship in male rats, as well as the occurrence of gliomas of the brain, though this increase was not statistically significant. Further, a significant increase in DNA damage was observed in hippocampus cells of the brain of male rats exposed to radiofrequency radiation.

In the NTP mouse study, there was a significant positive trend in the incidence of alveolar/bronchiolar adenoma or carcinoma (combined) of the lung in males exposed to radiofrequency radiation, while compared to the sham controls, all exposed groups of females had increased incidence of malignant lymphoma. Further, significant increases in DNA damage were observed in cells of the frontal cortex of male mice exposed to radiofrequency radiation.

In interpreting these findings, it is important to bear in mind that because of species differences, there may not be an increase in incidence of the same tumors as seen in mankind. Further, although these were large and well-conducted animal studies, the relative rarity of the tumors showing an increase in incidence means that it may be difficult to demonstrate significant increases in incidence which may be seen in the very much larger numbers of humans exposed to radiofrequency radiation.

In the National Toxicology Program study, the number of animals in the radiofrequency radiation studies was several thousand. However, in the world today, the amount of people using cell phones is estimated at 5 billion.

Even a small rise in very rare cancers from cell phone radiation would constitute a serious public health concern due to the fact that billions of people are using cell phones.

Exposure is widespread and increasing. Children are more vulnerable. Cell phone radiation penetrates deeper into their bodies and they will have a lifetime of exposure leading to a higher cancer risk.

This animal evidence, together with the extensive human evidence from case-control studies on brain cancer in Sweden, France, Canada and other countries, coupled with the rising incidence of brain cancers in young people in the USA, conclusively confirms that radiofrequency radiation is a category 1 human carcinogen. We cannot ignore this but must act quickly to reduce exposure to radiofrequency radiation from all sources to as low as reasonably achievable, especially for children.”

Anthony B. Miller, MD is a physician-epidemiologist, currently Professor Emeritus at the Dalla Lana School of Public Health, University of Toronto and a Senior Advisor to Environmental Health Trust. Dr. Miller has served as Director of the Epidemiology Unit of the National Cancer Institute of Canada, Chair of the Department of Preventive Medicine and Biostatistics, University of Toronto, Senior Epidemiologist, International Agency for Research on Cancer, and Head, Division of Cancer Epidemiology, German Cancer Research Centre, 2000-03; He has served as a consultant to the Division of Cancer Prevention, U.S. National Cancer Institute and to the World Health Organization

Read the science that has linked cell phones to cancer and other health effects at this link.