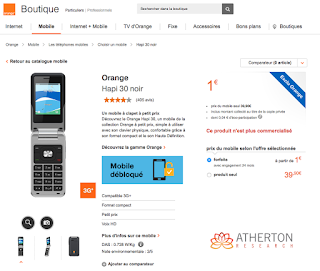 Citing excessive radiation levels, European telecom operator Orange (formerly France Telecom) issued a recall for a cell phone it’s selling under its own brand, the Hapi 30, and made by French manufacturer Mobiwire, a spin-off of Sagem Mobiles.

For the first time ever, Orange recalls a phone because of its excessive levels of radiation

Last month, Orange sent a letter to about 90,000 of its customers that purchased the flip phone to warn them of the defect. In certain conditions, the low-end phone, made in Mobiwire's factory located in Ningbo, China, would emit 2.1 watts of radiation per kilogram of body weight (or W/kg), which is over Europe's safety limit standard set at 2 W/kg.

This usually wouldn't be too much of a concern, but just a few weeks ago, 2 research studies (one 28 days long and the other, lasting 2 years) conducted by the U.S. National Toxicology Program (NTP) found “clear evidence” that exposure to cell phone handsets radiations caused heart tumors in male rats, and “some evidence” that it caused brain tumors, also in male rats. Female rats seem not to be affected.