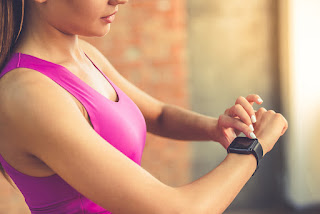 Judging by the ubiquity of Fitbits – those faceless watches nearly every woman wears today, with or without their active wear – this activity tracker has got to be the most popular fitness item. It uses WiFi (radiation) to track people’s every step and movement, how many calories burned, miles walked, and even tells time. This information also beams out to a personal account where the user can log-in and add more health stats in order to watch goal progression.

This writer began to have suspicions about health symptoms after receiving one for Christmas. I reasoned within myself that the extra activity would keep me away from other EMF stations in my life – the smart meter, my computer, Router WiFi, and my phone. That has to be healthier, right? Then again, if cell phone instruction manuals warn to keep the phone at least one full inch from your body at all times…why would wearing the radiation against the wrist be okay?

Soon, I began to have a strange, repetitive and painful electrical pulse running up and down what I thought was my left kidney. It was relentless and ran up and down over this kidney area as though I was a circuit board. I couldn’t tell why it appeared until I realized…

My Fitbit was worn on my left wrist which hangs down near my left kidney when I’m standing. And I only wore it during the day, while active. Shelving the Fitbit allowed the pain to subside after a few days, and it only returned when my phone got too close to the area. I’m so sensitive to EMF that if I didn’t write stories every day, I’d be legit off-grid for the health of my family.

Did you know that some Fitbit models encourage people to sleep while wearing them?? They do, in order to track their sleep cycles.

A little-known Fitbit recall took place in 2014, but has anything changed since then? Not a chance. In fact, complaints and reports of hazards have only increased.

On February 24, 2014, Fitbit recalled its activity tracker due to skin rashes. “Complaints of itchy, irritated wrists (See the full CNN story here) have prompted Fitbit to voluntarily recall all of its Fitbit Force wristband activity trackers. (See the story on this topic from Daily Mail here.)

There have been other concerns and issues also reported about Fitbits. Examples include:
October 20, 2014, Fox News: Experts: Why wearable tech could pose health risks
January 18, 2018, Natural News: There is no escape: New transmitter technology will charge your devices in your pocket, constantly bombarding you with EMFs

Complaints and concerns have also been posted on the corporate
Fitbit Community website:

January 6, 2016: “Has anyone experienced feeling dizzy and woozy wearing the Charge HR?”

“I’m glad someone else has mentioned this. We bought our fitbit this past Friday and I started wearing it on Saturday. I am pregnant with my third (not very far along) and have been experiencing some morning sickness. Today I have been in bed all day long due to morning sickness and dizziness, or so I thought. I decided to take off my fitbit for a while and now I am able to get out of bed and do my normal things.”

“I bought a fitbit charge HR 3 days ago. Fpr.2 days I woke up very dizzy and nauseated. I have never felt this way. I did not wear the fitbit yesterday and I feel fine. I have no health problems what so ever.“

I bought a Fitbit Alta last week – mainly for the Qantas Frequent Flyer Points. The first day I wore it I felt quite dizzy by the afternoon and my pulse rate was very erratic. The only previous time I have felt like that was at 5000 metres at Everest Base Camp. I am 77 but very fit (5 marathons, 100km cycling every week, yoga and other exercise.) I didn’t think the Fitbit could be causing that reaction but I googled “Fitbit side effects” and found plenty of posts. I took the Fitbit off late afternoon and haven’t worn it since…

Writer Frank goes on to note the symptoms of friends who wear Fitbit, including headaches and the resurrection of pain in areas that had once been corrected and presumed healed after surgery.