Did New York Times Have an Inside Track?

Much of the press coverage of the final NTP cell phone/cancer report was lousy. This time, the NTP seems to have wanted it that way.

Reporters were given very little notice to join the NTP teleconference on the release of the report. Nor was there much time to prepare a story for publication.

I received an email at 10:45 am on October 31 for a teleconference at 2 pm that same day. Many reporters missed the advisory and the call. Editors had little time to assign the story.

Attendance on the teleconference was spotty. Most of the major media outlets were missing. The Washington Post, The Wall Street Journal, Los Angeles Times, ABC News, CBS News, Bloomberg, Associated Press and Science were all absent. Most of them had been on the last two calls on NTP’s cell phone/cancer study.

When I asked NTP how many people were on the call, the press office refused to say. The transcript shows only eight reporters asked questions, a fraction of the numbers on the last calls. There was so little competition that many of us got more than one turn. The teleconference ended before the allotted 50 minutes —this included the introductory statement from John Bucher, the leader of the project.

The news that the NTP now believes the cancer link is “real” was under embargo until the next day, November 1. That gave the news media less than 24 hours to prepare their stories, an unusually short time for a technically complex subject. The main reason for embargoes is to give reporters time to do their homework and prepare a clear and accurate write-up. For instance, today, I received two advisories for upcoming releases: The National Academy of Sciences allowed a week, Nature five days.

Even the fact that the report was coming out in less than a day was embargoed by the NTP. It apparently wanted no advance notice of any kind. We asked, What’s the rush? Once again, the press office stayed mum.


There was one exception among major media outlets: The New York Times. It had two reporters, William Broad and Roni Caryn Rabin, on the call. As it happened, Broad, a long-time member of the science desk, was already working on the story. He was making background calls a week earlier; he even called me a couple of times. When I wrote Broad asking if he had had the benefit of a “hot tip,” he did not reply.

There’s a long history of New York Times science reporters —Broad included— downplaying, if not outright dismissing, news of electromagnetic health effects. Anyone wanting to conceal the fact that NTP had found “clear evidence” that cell phone radiation could lead to cancer would likely leak the story to the Times.

And the Times delivered.

Here’s the headline from its Web site.

You almost don’t have to read the story to dismiss the NTP’s ten-year, $30 million project as a waste of time and money. The gratuitous modifier “at least in male rats” could make you wonder why the NTP exists at all.

Lost to the reader is the fact that animal studies are widely used by drug and chemical companies to determine toxicity. All agents that cause cancer in humans also do so in animals. And chemicals frequently affect one sex more than another; gender differences in cancer rates also exist in humans.

And then there is the obvious error in the headline: NTP found more than “some evidence” —it saw “clear evidence.” Broad acknowledges this in his story, if only indirectly in the penultimate graph. No one on the science desk knew or cared enough to correct the distortion.

The subhead of Broad’s story, “Many caveats apply, and the results involve radio frequencies long out of routine use,” offers additional —unjustifiable— reasons to discount the NTP finding.

The results are outdated, the Times and others say, because NTP tested old tech —2G (GSM and CDMA)— that is no longer in widespread use.

Results of animal experiments with 3G (UMTS) offer no reassurance, however. Just the opposite.

Two different German labs have exposed mice to 3G. Cancer promotion was found in each case. The lead author of the second study, Alex Lerchl, concluded that 3G signals “obviously enhance the growth of tumors.” Read our report from 2015 here.

The fact is that we don’t know whether the higher G’s are any safer than 2G. Believing so is simply wishful thinking.

Another reason to discount the cancer findings, according to the Times, CBS News and others, is that the rats’ exposures were much higher than those people normally encounter. To be fair, the NTP promoted this perspective by titling its news release: “High Exposure to Radio Frequency Radiation Associated With Cancer in Male Rats.”

What’s missing is that, in several instances, NTP saw a stronger effect at a low dose than at a high dose. This is called a nonlinear dose-response. Statistics for brain tumors (glioma) in male rats exposed to GSM radiation make the case:

Lerchl in Germany found a similar nonlinearity. The histogram, below, of lymphoma response versus radiation dose from his paper shows that he saw a greater response at the low dose than at a dose that was fifty times higher. 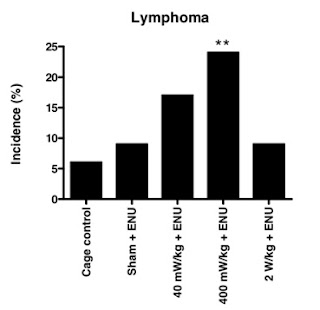 The lesson here, as the peer review panel tried to teach the NTP, is that RF radiation does not necessarily follow a dose-response relationship, as most toxic chemicals do. At this point, one can only guess where the threshold for RF effects may be. It could be lower than now commonly believed, possibly much lower.