Mounting Resistance Against 5G in Switzerland

The growing resistance against 5G is commendable.  However, we are neglecting the fact that this will encourage us to make greater use of our radiating devices.  What is missing in most of the media articles on 5G opposition is the mention of the particular vulnerabilities of children and pregnant women to radio frequencies emitted by these technologies and wireless devices.  It is now more than urgent to launch an information campaign on the use of these gadgets in order to reduce exposure to this radiation.  We see too many young mothers walking with their babies in strollers, using their mobile phones near the baby's head and body and even placing a radiating cell phone or tablet in their tiny hands.

Here is a glance at the Suisse Romande media:

The People of Geneva are fighting against 5G antennas
Tribune de Genève , 01 April 2019 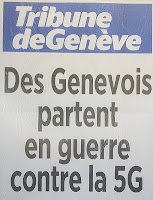 Some people are waving the precautionary principle in the face of the arrival of this technology.  Necessary for communicating connected objects, 5G is emerging while carrying its share of concerns. Its deployment has only just begun in Geneva and it has caused an outcry.  A group of about twenty inhabitants has just joined forces to demand a moratorium on the installation of new antennas equipped with this technology. Their approach complements that of PDC deputy Bertrand Buchs, who tabled a motion to this effect in the Grand Council. The elected official pleads for independent studies of the industry in order to scientifically attest to the non-harmful nature of exposure to 5G waves. Thus, between the health risk and the fear of an imposed technology, the Geneva association advocates the precautionary principle. The Municipality of Carouge has already indicated that before authorizing a 5G antenna on its territory, it prefers to wait for the results of the tests conducted in several cities in Switzerland.

The concerns cited are:
- effects on human health
- effects on animal life, especially bees and the navigation of birds
- risk of Chinese espionage
- weaknesses in cybersecurity
- cost of new phones (1300 - 2500 Swiss francs - 1,300 - 2,500 US dollars).  Phone subscriptions will cost more.  The expenses of installing 15,000 supplementary antennas in Switzerland need to be covered.

Rarely has a new commercial and technological step caused such an outcry in Switzerland, and in the region of canton Vaud. "We didn't expect it," says Swisscom spokesperson Christian Neuhaus.  Various coalitions have joined forces:  high school students, electrosensitive persons, ecologists, those opposing installation of cell phone antennas.  Many people are concerned about the increasing computerization of society, automation of activities, loss of autonomy, and monitoring and control that is being imposed on their lives.

In Switzerland, a task force of specialists is analyzing studies on the effects of 5G
Le Matin Dimanche, 31 March 2019

"It takes a lot to undermine the popularity of Roger Federer and yet, his advertising for Sunrise praising the merits of 5G is poorly looked upon by part of the public. 'What is he still capable of for the sake of money?' asks a Facebook user.  "Switzerland has Exit [assisted suicide organization] and Roger Federer", comments another beneath a drawing of Death with a scythe on a tennis court...

"In Switzerland, the Confederation seems to be aware of the large amount of contradictory information on the effects of waves on health.  While the Federal Office of the Environment (OFEV) announces a report this summer, a task force has been regularly analyzing studies published on the subject since 2014.  Called BERENIS , the consultative group of experts on non-ionizing radiation, assembles seven specialists on public health, pharmacology, neurology and veterinary toxicology.  It is, moreover, based on the conclusions of this group that OFEV fixes the limit values on immission exposure for the Ordinance on protection against non-ionizing radiation which defines the power for mobile telephony antennas..."

Regarding the conclusions on 5G, "no coherent health effect has been shown below the limits recommended by the International Commission on Non-Ionizing Radiation Protection (ICNIRP)," attests Dr. Stefan Dongus, coordinator of BERENIS, Today, the frequencies attributed in Switzerland to the early days of 5G present an absorption capacity by the human body similar to those previously used by mobile communications.  There exists, however, indications of certain physiological effects, for example, on brain waves... "

Dr. Dongus:  "Even a small risk should be taken into account because many persons are concerned."

The article also questions the independence of these "experts", including those at BERENIS and ICNIRP.

A 21-year-old nursing school student, Martin Grimm, launched a petition against 5G and its health risks in 5 languages addressed to the President of Switzerland and three others, including the Minister of communications, at the beginning of March.  It now has over 50,000 signatures.

"I thought I might get 300 signatures, but this enthusiasm shows that citizens are worried," says the young man. "In Switzerland, we are consulted on everything and anything, but when faced with something so important and affecting our health, we are not asked for our opinion. It's not okay!"

Extract from interview with Dr. Michel Matter, Vice President of the Federation of Swiss Doctors:

Do people have reason to be concerned about the arrival of 5G?

Dr. Matter: "Clearly yes. For the Federation of Swiss Doctors, the situation is very clear. The precautionary principle must be adopted. The precautionary principle says: "Be careful, there may be dangers." So we need to know before we give the green light to the 5G that a lot of people are waiting for. But first, priority to health. There are clear questions about the risks related mainly to cancers of the nervous system..."

See all posts on 5G (in French):
https://mieuxprevenir2.blogspot.com/search/label/EM-5G