Danger of Waves
Letter to the Editor, Tribune de Genève, 12 June 2019
(inspired by the opinion of Olivier Bot, Deputy Editor-in-Chief): "WHO and the health of multinationals".) 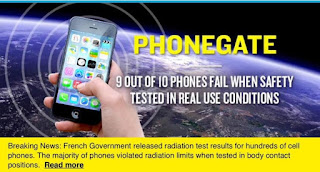 Many mobile phone manufacturers mislead consumers by testing the amount of energy carried by RF waves absorbed by the user of these devices at a distance from the body, not the way people use them - against the head or body or keeping them in a pocket. The French National Frequencies Agency has found that many mobile phones tested against the body exceed the threshold for exposure to waves set by Europe and Switzerland. In this context, the international NGO, Phonegate Alert Association, filed a criminal complaint in France against the Chinese manufacturer Xiaomi for deception, fraudulent commercial practices and endangering the lives of others.

It is likely that further proceedings will follow, as in the case of the legal actions against glyphosate. The reclassification of toxic agents by the International Agency for Research on Cancer/WHO may well reclassify waves from group 2B to 2A, "probably carcinogenic to humans", the same category as glyphosate.

It is time for manufacturers to act responsibly to avoid costly legal proceedings. Public health and regulatory authorities should warn consumers.