First part of article and extracts: 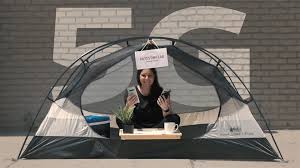 In tests, the 5G often switched off due to summer heat, leaving our columnist to cool the devices with ice packs or air conditioners

Today’s forecast: 95 degrees and sunny with thunderstorms likely in the afternoon. No chance of 5G testing.

One of the biggest findings of my multi-city 5G review tour: The Samsung Galaxy S10 5G isn’t reliable in the summer—unless, well, you summer in Iceland.

When I ran tests, the phone’s 5G often switched off due to overheating, leaving me with a 4G connection. Cellular carriers demo-ing or testing the phone have taken to cooling the devices with ice packs and air conditioners.

The phone does this when the temperature reaches a certain threshold to minimize energy use and optimize battery, a Samsung spokeswoman said. “As 5G technology and the ecosystem evolve, it’s only going to get better,” she added.

The fifth generation of cellular networking, 5G is designed to replace 4G (aka LTE) and pave the way for innovation ranging from augmented reality to self-driving cars. Name any tech buzzword: It’ll probably benefit from 5G’s faster speeds and reduced lag.

Leading U.S. carriers are already taking the first steps, launching 5G here and there around the U.S. In just the past few weeks, Sprint launched in Chicago, AT&T T -0.53% in Las Vegas, T-Mobile in New York City and Verizon in Denver and Providence, R.I. By the end of the year, there should be 5G in around 30 U.S. cities.

Eager to test out a technology that’s been more hyped than flavored sparkling water, I embarked on a 5G expedition from Denver to Atlanta to Chicago to Manhattan’s Lower East Side. I mostly used the new, $1,300 Samsung Galaxy S10 5G, one of the first 5G phones and the only one available across all the carriers. I also tested the LG V50 ThinQ 5G on Sprint’s network; Verizon has a version but I didn’t test it.

After nearly 120 tests, more than 12 city miles walked and a couple of big blisters, I can report that 5G is fasten-your-seat-belt fast...when you can find it. And you’re standing outdoors. And the temperature is just right.

As my findings show, 5G is absolutely not ready for you. But like any brand new network technology, it provides a glimpse of the future...

That’s 52 times the average 4G network download speed in the U.S., according to internet speed-test company Ookla. It’s 18 times the speed of my home network...

Finding 2: Got a 5G signal? Don’t move.
With the exception of Sprint, these speeds can be found only in small pockets around town. (More on Sprint below.) In fact, I had to ask carriers for landmarks and street corners to find the coverage...

Finding 3: Got a 5G signal? Don’t go inside.
Right next to that tower in Denver where I notched those crazy speeds is a small bakery with delicious bread. When I stepped inside, the 5G signal vanished. That’s the other thing about millimeter waves: Most can’t penetrate walls or other hard obstacles...

Finding 4: AT&T’s 5GE isn’t 5G.
Speaking of AT&T: If you think your current AT&T iPhone or Android phone is a 5G phone because “5GE” sometimes appears in the corner next to your network strength icon, it isn’t. It’s just good 4G, rebranded “5G Evolution” by AT&T’s marketing department...

Finding 5: Ice packs not included.
In Atlanta, where it was 90 degrees the day I visited, I could run only one or two 5G download tests before the phone would overheat and switch to 4G. When that happened, I’d head back to the car and hold the phone to the air vent. In Chicago, another day in the 90s, I had to wait until the sun went down to finish my Netflix download tests. In New York on an 83-degree day, I went with the ice-cooler trick: A minute or two in the cooler, and 5G switches back on...

Finding 6: Sprint finally has an edge.
Millimeter-wave issues like overheating and limited range weren’t problems with another flavor of 5G called “mid-band.”..

Finding 7: 5G doesn’t do much right now.
When the stars aligned and things worked, the only real benefit I found was speedily downloading TV shows before a flight. Emailing, web browsing, Instagramming, streaming video—none of that felt any different...