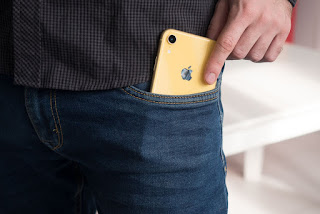 If you have been following the news in the past few days, you might be left with such an impression because of the infamous Chicago Tribune investigation that tested RF emissions on a number of few popular phones and found the FCC and phone makers' testing methods obsolete:

"The additional iPhone 7s were added because of the high results from the first iPhone 7 tested. All of the tests, according to Moulton, were done in accordance with FCC rules and guidelines."

The tests were done on the band and frequency that showed the highest emission levels in the FCC table for that particular phone which is public information. Apple and Motorola returned comments that this is not how you test, as actually holding the phone or activating the proximity sensor when next to your ear, trigger automatic reduction in RF emissions.

The thing is, however, that the FCC's own guidelines for these measurements are for keeping a phone away from your body, 5-15mm which is the equivalent of carrying it in a holster. A relic from past times, we know. Who carries their phone like that, though? Women have the dubious advantage of clothing companies creating pocketless or tight jeans for them, so they often carry the handset in their purse.

Men, however, usually have the phones in their jeans or shirt pockets, while girls often carry them in their back pockets or even sports bras. That shortens the distance of the handset to body parts significantly, and the Tribune asked researchers to test from a 2mm distance, the typical thickness of a shirt or jeans pocket. Needless to say, since the absorption rate grows exponentially with shorting the distance, it far exceeded the FCC's 1.6 watts per kilogram specific absorption rate (SAR) safety level.

This SAR threshold is set for larger distances that the phone-to-body situation we have with modern smartphones, so the FCC has started its own investigation into the matter. The litigious country that we are, there is already a class action lawsuit filed against Apple and Samsung for misleading radiofrequency radiation claims.

To be fair, their tests were done within the FCC guidelines so maybe an update to those for the modern era is warranted. There is one pressing question that keeps our mind occupied, though - since we are mostly carrying our phones in cases that add to the distance they are kept from our bodies, are we safer because of the wrappers? As scientists love to say: "more research is needed," so no need to get overly alarmed just yet.

We'd definitely put a case on, though, as the test showed that the combined thickness of your pocket and underwear still keeps the phones dangerously close to your body, and when tested in the worst case scenarios - getting a call in an area with weak signal, for instance - RF radiation levels far exceeded the safe levels:

"To help answer this question, the Tribune cut out pieces of dress shirts, T-shirts, jeans, track pants and underwear and sent them to Moulton. His measurements indicated that phones carried in pants or shirt pockets typically would be no more than 2 millimeters from the body.

Moulton then conducted the same radiation tests, using the same methods and equipment. The only difference was that the phones were placed 2 millimeters from the phantom body — closer than any of the manufacturers’ own tests and much closer than the maximum distance allowed by the FCC.

Maybe, he said, the phones’ proximity sensors would kick in at this closer distance, and the radiofrequency radiation levels would drop accordingly.

And the Samsung Galaxy phones?

All three measured at more than twice the standard, with the Galaxy S8 registering 8.22 W/kg — five times the standard and the highest exposure level seen in any of the Tribune tests.

Only two phones came in under the standard in the 2-millimeter “pocket test": an iPhone 8 Plus and a BLU Vivo 5 Mini."