We thank the dedication of all the groups and experts and people working worldwide to raise awareness of the health risks of exposure to wireless technology to protect, in particular, vulnerable populations, including children and pregnant women. 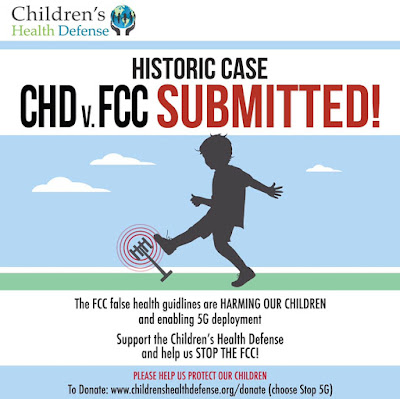 Robert Kennedy, Jr., Chairman of Children’s Health Defense (CHD), is committed to be proactive on the concerns regarding excessive exposure of our children to 5G and wireless radiation. To fulfill this promise, CHD submitted a lawsuit on February 2, 2020 against the FCC for its December 4, 2019 decision to decline to review its 1996 guidelines, and for its determination that the guidelines are protective of human health.

The Dec. 4 determination provides a rare opportunity to sue the FCC and expose its disregard for public health that has been causing so many injuries and deaths, including among children. We will be representing the many children who have been injured. This is the opportunity we have been waiting for; a successful lawsuit on this will be a game changer.

To have the best chances of succeeding, we have assembled an ideal team of Attorneys to lead this case! Each one brings different strengths to the case:

Robert F. Kennedy Jr., CHD’s Chairman, is a leading Environmental Attorney who has been involved with many groundbreaking lawsuits including the recent successful cases against Monsanto. He was a senior attorney for the NRDC and now leading cases for the protection of children’s health rights.

Scott W. McCollough is the Attorney who is representing the IRREGULATORS in their lawsuit against the FCC, a case that will help expose a multi-billion-dollar fraud by Telecom companies. Scott has decades of experience as a Telecommunications and Administrative Law Attorney, leading the type of lawsuits we are submitting against the FCC.

Dafna Tachover is an expert on wireless and 5G health effects and has recently been brought on board at CHD to spearhead the Stop 5G effort. Dafna brings specialized knowledge and experience for this case. She is an Attorney, and holds a MBA, and has a Telecommunications background. She has been involved in cases focusing on wireless harms including a Supreme Court case in Israel against Wi-Fi in schools, a case that led to the first limitations on Wi-Fi worldwide!