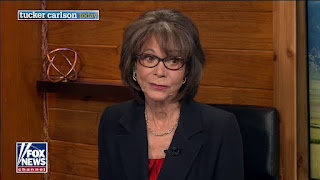 Epidemiologist and environmental hazard expert Dr. Devra Davis called for an independent evaluation of the dangers associated with cell phone radiation, citing a potential link to cancer as cause for heightened concern on Fox Nation's "Tucker Carlson Today."

"The issue of cell phone radiation is, we've been in denial, and the denial is in large part psychological," Davis told Tucker Carlson in an episode released Monday. "We simply can't think about the possibility … Is it a chance that these things are harmful?"

Davis, who has a Ph.D. in science studies and a post-doctoral Master’s of Public Health in epidemiology, was appointed by former President Bill Clinton as a senior adviser in the Department of Health and Human Services, where she served as a member of the Chemical Safety and Hazard Mitigation Board.

Davis has been at the forefront of scientific studies examining the link between cancer and heavy cell phone use with her nonprofit, the Environmental Health Trust, which conducts research on environmental health hazards and seeks to educate professionals and policymakers about the dangers.

There have been varying studies about the potential health impacts of cellphone radiation, from the earliest models to the latest 5G handsets, with mixed results.

There could be a link between cellphone use and an increased risk for tumors, particularly on the right side of the brain, research from the University of California, Berkeley suggested.

"We have controlled studies where they take two test tubes of sperm from a healthy man. One they don't expose to cell phone radiation, the other gets exposed. The exposed test tube, those sperm will die three times faster with three times more damage to their DNA," she said. "That has been replicated in many studies, so we know that this is a fact, and yet when the bodies that advise the government are asked for their advice, they say, 'We don't have enough evidence.'"

It's time the Federal Communications Commission and health professionals come to terms with the "very inconvenient truth," Davis said.

"If you look carefully at the membership of those bodies and the revolving door between the industry and those who regulate it, you can see that there really hasn't been a full, independent evaluation, which is why we at Environmental Health Trust are calling for an independent evaluation of the science, and the FCC has utterly failed to look."

To hear Davis's scientific findings relating to cancer and cell phone use and for tips on how to mitigate radiation harm, watch the latest episode of "Tucker Carlson Today" available now on Fox Nation.

Yael Halon is a reporter for Fox News.

The full one hour interview will be available to watch anytime on Tucker Carlson Today on Fox Nation at www.nation.foxnews.com with a subscription.