Interview with Dr. Dominique Belpomme by Radio Canada on Electromagnetic Fields and Electrosensitivity


Dr. Belpomme, President of ARTAC (Association for Research on Treatment Against Cancer) is asked by the interviewer about his creation nearly three years ago of the European Cancer and Environment Research Institute (ECERI).  The Institute collaborates with 15-20 European teams researching the environmental causes of not only cancer but also other diseases and disorders, including Alzheimer's and autism.

According to Dr. Dominique Belpomme, 80-90% of cancers are linked to the environment. Living was not always “carcinogenic”. Cancer is a recent disease due to the fact that it has become a scourge of huge proportions. Cancer as well as obesity and type 2 diabetes have exploded. We are obliged to ask why. The answer is: life style and pollution:  chemical pollution, pesticides, electromagnetic fields (EMF) produced by wireless technology. Do we continue this technology for purely economic reasons or do we take into account the very high health costs that we will be paying as a result?

Referring to the Canadian safety code, Dr. Belpomme mentions the scientific denial - for purely economic and financial reasons. There is no scientific controversy. High-level independent scientists all agree that there is a major risk from propagation of wireless technology: appearance of certain cancers (EMF are recognized as“potentially carcinogenic” by WHO) and the risk of Alzheimer’s in electrosensitive persons.

In less than four years, Dr. Belpomme has questioned and examined clinically more than 1,000 electrohypersensitivity (EHS) – self reported patients. These are real sick persons who are in a pre-Alzheimer’s state. Canada’s safety code recognizes heating of tissues. What is the most conclusive scientific proof of biological effects? : animal experiments (psychological explanations for their afflictions cannot be attributed to animals) and biological tests of electrosensitive persons which indicate a pre-Alzheimer’s state. These tests include:

- Brain imagery showing vascular hypoperfusion in the area of the brain (the limbic system) where Alzheimer’s starts
- 2-10 times higher levels of histamine in the blood.
- Detection of other markers of the opening of the blood brain barrier.
- Higher levels of auto-antibodies against O- myelin and / or stress proteins
- Decrease in the production of melatonin in 24h urine


These indications are objective and show the same biological anomalies as found in animals exposed to EMF.

What can we do? Treat these sick persons with natural anti-inflammatory products and anti-histamine medications and anti-oxidants; correct the deficit in vitamins and oligo elements to avoid Alzheimer’s. The sick persons are partially reimbursed by the French system, but these medicines are not recognized as specifically for treating electrosensitive persons, only for their biological or clinical properties. More and more electrosensitive persons are being recognized as handicapped.

We must take daily measures to protect ourselves: never use a cell phone for more than 20 minutes a day, in sequences of 6-minute calls. Limit use of cell phones by children and adolescents. Ban cell phones before age 12. Pregnant women should use cell phones as little as possible to protect the very vulnerable fetus.

Dr. Belpomme then talks about smart meters: better to call these “intelligent” meters, “dumb” meters. They add to the electrosmog. The interviewer says these emit 83 seconds a day. Dr. Belpomme replies that more than the dose, it is the repetition of the dose that makes the poison. Electrosensitive persons are also affected by artificial and solar light.

Today, risks from exposure to electromagnetic fields are recognized by the whole scientific community. The latest statistics from Europe indicate that 10% of the population suffers from this syndrome of intolerance to EMF and the numbers are growing. These people are totally handicapped in their lives. Statistics in peer-reviewed publications predict that in the next 50 years, from 25 to 50% of the population will be afflicted. Dr. David O. Carpenter in the United States says exactly the same.

The interviewer asks, how can you explain that the most renowned organizations contest the research, saying there is no scientific evidence or at best, weak evidence?. Dr. Belpomme replies by referring to the three BioInitiative Reports compiled by 30 of the top world experts. Out of over 3,000 articles published in the best international reviews, two-thirds say there is a health risk. He goes on to emphasize again the denial and financial interests which push the media to misinform the public.

When asked about his own use of wireless technology, Dr. Belpomme says he uses a cell phone for only a few minutes a day – for emergency calls. There is no Wi-Fi in his offices, everything is wired. 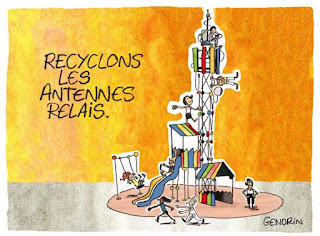