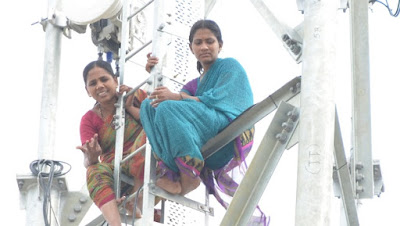 It was their grit and determination that startled every onlooker and even the police.

Two mothers in their 30's, climbed up a 40-50 feet tall cell phone tower Wednesday morning and stood to their ground till evening without having a proper meal or enough water to drink till late in the evening, with a sole objective.

They want the cell phone tower to be removed from their neighbourhood and nothing less than that.

The incident took place in B-section of Addagutta basti which is one of the largest slums in the country. The cell phone tower was installed on top of a three-storeyed building in the locality about a month ago and the agitation against the same has been on since then.

About 15 days back, the house owner, according to the dwellers there, had promised to remove the tower on request of the residents of the colony. However, they say that nothing has been done and tower is set to be operationalised in the coming days.

“They are going to give power supply. After that the tower will never be removed. My mother will not climb down until authorities promise to remove the tower,” said Sudha’s 15-year son Dheeraj Kumar in the morning. Sudha’s second son is merely one year old.

On the other hand, Sobha’s son 14-year Vinod quipped: “We have searched on the internet that radiation from the tower can affect our lives. Also, it is unsafe to have such a tall tower atop a tall building in such a congested locality.”

The tower is placed at the end of the basti where the lanes are not more than 5 feet wide. Naveen Kumar, Sudha’s husband alleged that the owner of the house has pulled all strings in police, GHMC and government level to safeguard himself.

“They say we can go to the court or government for cancellation of the tower licence. We want the terrace to be locked down till we get the permissions. Unless we get the assurance, they won't come down,” said Naveen Kumar.

Meanwhile, the basti dwellers met local MLA and minister T Padmarao Goud who rushed to the spot knowing about the half-day long protest on the tower. It was only after Padma Rao's assurance that the women climbed down.

They are outside the police station till last reports came in.