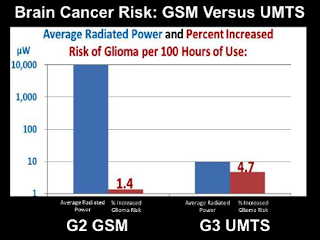 There are solid scientific reasons why the new 5G Spectrum Frontiers technology could turn out to be more dangerous than existing technology. Simply take a look at the research that compares 2G (GSM technology) to 3G (UMTS-talk, text, and data- Smartphone technology).

People usually assume, the more power you absorb, the higher the risk. However, when scientists reviewed the first ever paper that looks at brain cancer risk by type of phone used- Second Generation (2G) or Third Generation (3G)- they found a stunning conclusion. The lower power 3G UMTS phones had a higherglioma (a type of brain cancer) risk than the higher power 2G GSM phones.

Although 3G technology has up to 1000 less power this technology shows a more than THREE TIMES RISK for glioma in comparison to 2G.

We do not have long term research on 4G LTE which is still relatively new. We certainly do not have such data on Spectrum Frontiers and the Fifth Generation technology which has yet to be developed. However, the current data increases the evidence suggesting that these new untested technologies which could well prove to be even more harmful.

In 2011, radio frequency radiation (RFR) was classified as a possible human carcinogen (Group 2B) based on epidemiological studies showing increased brain cancer risks [1]. Since that time, the epidemiological evidence for brain cancer has become even stronger suggesting classification of RF as a probable human carcinogen, Group 2A [2] or even Group 1, a human carcinogen [3]. Experimental studies have also suggested several molecular biological and cellular mechanisms which provide a basis for carcinogenicity [4]. Consistent with findings that UMTS signal may be more effective at inhibiting DNA repair [5, 6], risk of glioma is larger from UMTS compared to GSM signal [7].

Counterintuitively, a higher glioma risk was observed for 3G, UMTS mobile phone use compared with 2G, GSM use [7]. Usage of 3G, UMTS phones increased the risk of glioma by 4.7% per 100 hours of cumulative use, OR 1.047, 95% CI=1.002-1.093; 2G, GSM mobile phones by 1.4%, OR 1.014, 95% CI=1.009-1.018. While these data were based on short latency and rather low numbers of exposed subjects, they are in line with the hypothesis that 3G, UMTS may have higher biological affects due to the wider frequency band, even though 3G, UMTS mobile phone’s average radiated power is up to 3-orders of magnitude lower than 2G, GSM mobile phone’s average radiated power (tens of µW vs tens of mW). Figure 1 illustrates risk with cumulative use, adapted from [7]. Figure 2 illustrates average rated power in combination with increased risk per 100 hour of use (log scale from [7}). [See original article.]