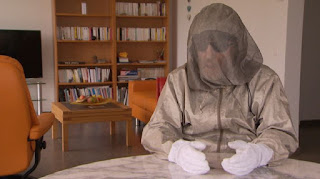 This excellent 55-min. documentary is now available for viewing on-line in French.

Being connected can seriously damage health

Are we putting our health at risk by constantly bathing in the electromagnetic radiation of relay antennas, telephones, Wi-Fi and connected objects? This question frightens the medico-scientific community, which is seeing an increase in cases of electrohypersensitivity and sick people in the population.

We know the phone which heats the head during a long conversation.  The thermal effect of cell phones is known and regulated but it is the other effects of electromagnetic radiation that are the subject of debate.

Relay antennas, phones, Wi-Fi, connected objects, we are bathed in a continuous electromagnetic field whose impact is beginning to be felt among the population.  Some people become electrohypersensitive, their lives going from normal to a nightmare, others develop tumors which has lead the courts of other countries to deliver judgments in their favor.

Today, faced with the continuous expansion of this connected world, politicians, members of the medico-scientific community worldwide, and persons affected by waves are sounding the alarm in the face of what could become a major health issue in the coming years.

Among the testimonies:
- Innocente Marcolini (an Italian court recognized as a professional illness a brain tumor caused by intensive use of a cell phone at work)
- Michèle Rivasi, Member of the European Parliament
- Dr. Daniel Favre (the effects of EMF on bees)
- Prof. Dominique Belpomme (showing the results of encephaloscans of EHS personnes - cerebral hypoperfusion)
- Dr. Nathalie Calame, one of the few physicians in Suisse Romande treating EHS persons)
- Christian Schifferle, initiator of the apartment building in Zurich for persons with EHS and MCS)