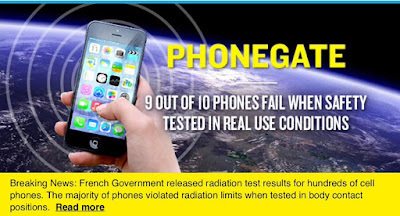 Under court order, the National Frequency Agency (ANFR) of France recently disclosed that nine out of ten cell phones exceed government radiation safety limits when tested in the way they are actually used, next to the body. As the Environmental Health Trust reported, French activists coined the term “PhoneGate” because of parallels to the Volkswagen emission scandal (referred to informally as “Dieselgate”) in which Volkswagen cars “passed” diesel emission tests in the lab, but actually had higher emissions when driven on real roads. In the same way, cell phones “passed” laboratory radiation tests when the “specific absorption rate” (SAR), which indicates how much radiation the body absorbs, was measured at a distance of 15mm (slightly more than half an inch). However, the way people actually carry and use cell phones (for example, tucked into a jeans pocket or bra, or held in contact with the ear) results in higher levels of absorbed radiation than found in lab tests.

The French data is also corroborated by a 2017 independent investigation by the Canadian Broadcasting Corporation (CBC) that tested cell phones and found SAR values surpassed the US and Canadian allowable SAR values when the phones were tested in body contact positions. These findings were also replicated by the US Federal Communications Commission (FCC). They concluded that radiation levels reach as high as 300% more than what manufacturers claim.

Why be concerned? A 2017 study in the American Journal of Epidemiology and multiple other studies have correlated long-term exposure to cell phone radiation with the risk for glioma (a type of brain tumor), meningioma, DNA damage, and other health risks.

The wireless industry claims to be in compliance and opposes mandatory disclaimers about keeping phones at a safe distance. They also oppose updating cell phone radiation testing methods in ways that would accurately represent real life use. Establishment media have failed to cover these issues, and the public is largely unaware of the risk of cell phone use or the importance of keeping this technology a safe distance from your body.

In May 2017, the California Department of Public Health released safety guidelines in response to possible health impacts from cell phone radiation. Yet this information was withheld from the public for seven years, and only released after litigation. Litigation is also moving forward for more than a dozen people who claim their brain cancer is related to their cell phone use. In Italy, a 2017 court ruling recognized a link between cellphone use and brain tumors and granted lifetime compensation to a man who developed a brain tumor after 15 years of cell phone use.

Why does the public have to sue to get this information? And what about children, the most vulnerable among us? The American Academy of Pediatrics has clear recommendations to reduce cell phone radiation exposures to children—yet pregnant women continue to use wireless devices on their abdomens and children are given cell phones as toys.

As leaders in this field, what have the French done? As reported by Environmental Health Trust, French law ensures that SAR levels are identified prominently on cell phone packaging and that cell phone sales are banned for young children. In 2016, new policies stated: “All wireless devices, tablets, wireless toys, etc. are subjected to the same regulatory obligations as cell phones.” EHT also reported that, according to Le Monde, in 2017 France would ban cell phones from schools and colleges, and playgrounds.